Yellow Star
By: Jennifer Roy
Yellow Star, by Jennifer Roy is a heartfelt novel that involves a girl named Syvia. She lives in the ghetto. I feel sad that she has to hide from the Natzees that come around to look for Jews.
I liked this book in many ways because it was so inspirational. Another reason why I liked this book is it makes you feel like you’re in Syvia’s shoes because it’s so hard to put the book down!
Jennifer Roy has written more than 30 books for kids and teens. She was a former teacher. She currently has a BS in psychology and a MA in elementary education. She’s currently living in New York with her husband and son.
The people that are most important in this book are Syvia, a young Jewish girl that gets brought into the ghetto by the natzees. Dora, Syvia’s younger sister gets put in the ghetto with her sister, Mom, and Dad.
The story Yellow Star is mostly the Natzees coming to their house and then the family getting taken to the ghetto. About 270,000 people were forced to stay in the ghetto with harsh conditions that were almost impossible to live in. The reason they were forced in the small ghetto is because German’s invaded the town of Lodz, Poland. At the end about 800 people survived, but did Syvia get out of the ghetto? That’s something you will have to find out.
I didn’t think there was a weakness in this book because I liked everything about this book because I thought it was so interesting that if they were considered a “Jew” that they had to where a Yellow Star.
I think readers should read this book because it makes you wonder why it happened. I give this book ten out of ten stars! Best book I have read in a long time.
The genre of this book is Historical Fiction, but seems like it would be non-fiction because it’s based on true events. I think anyone twelve and up would like and understand this book. I give Yellow Star thumbs up! 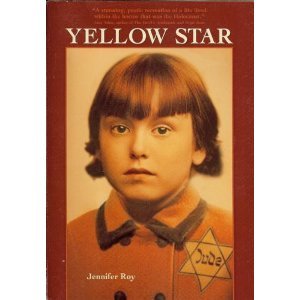