Alive and Well in Prague, New York by Daphne Grab

Favorite Quote:
"All we have to decide is what to do with the time that is given to us"
-Lord of the Rings

Every avid reader has their own guilty pleasure within a certain genre. For me that is Historical Romance novels. It seems that as soon as I open the cover to one, I can’t put it down until the plot line has concluded. I know. A little embarrassing, but if anything being acutely aware this unannounced fact extremely helps me in the ability of smelling a “good” book. If I pick up a book that is not a Historical Romance, but am able to read it with just the same vigor, and connectivity with the story line, then I know it must be somewhat elevated beyond, pure words disjointedly placed together happening to form some sort of a storyline, which one unfortunately finds all to often within the confines of modern literature. Now does that sense quickly classify a novel under my own personal category of a “good” book? Hardly. But it does place it up for further negotiation and analysis.

The novel Alive and Well in Prague, New York by Daphne Grab is one of these books. Truly, I grabbed (pun intended) this book on a whim during a recent visit to my local library. I was solely looking for a quick read, surface level book, to pass the time between my attack on different Lord of the Rings novels this summer. But in checking out this book I recieved something way beyond the bounds of anything I had bargained for.

Alive and Well in Prague, New York centers around a few months in the life of a teenage New York City girl, Matisse, forced to turn country due to her fathers terminal Parkinson’s disease, and thus his need for “fresh air”. Now it sounds like your typical young adult read: “Kid is forced to do what they don’t want. Parents say it is for the better. In the end the Kid is happy and realizes their parents were somewhat right all along. BLAH. BLAH.BLAH” But here’s where Alive and Well in Prague, New York stands out from all your typical teeny bopper dime reads. The artistic parallelism that Grab brings to the story between Matisse’s hatred of the life she is seemingly forced to live and the more flawed emotional situation she has slowly placed herself in with her parents, seems flawless and effortless, compared to that of any conventional teenage read. Also the emotions Grad has placed, at least within the main character, are raw and not forced as I have seen all too often within such cookie cutter novels. Yes, this makes our main character a little more less of the conventional likable and perfect heroine, yet in a sense her faults make her more real, more relatable.

I’m afraid a small portion where the novel does fall short of my initial assertion is found within the confines of the love interest. The chemistry is quite cliche in it’s approach and plainly undeveloped and unrealistic in the feelings of each character for the other within the little time they have known one another. It would have fit the tone of the novel more to have kept the two characters solely as friends with the anticipation of what might come. Furthermore the love interest’s reference to Buddhism and meditation was a little out of place, and didn’t fit comfortably at all within the plot line and the development of the story.Although through these slight flaws, Alive and Well in Prague, New York did soar beyond my expectations.

I must give a hand to Grab for her ability to take such an overused plot line, and flawlessly add embellishments to the story, while still keeping a level of sophistication that is usually avoided by Young Adult writers, afraid of anything which might have the possibility of selling poorly. Grab definitely took a risk with this book, some of it paid off and some of it didn’t, but in the end she succeeded in producing a solid novel, that was memorable and different, in all the right ways. 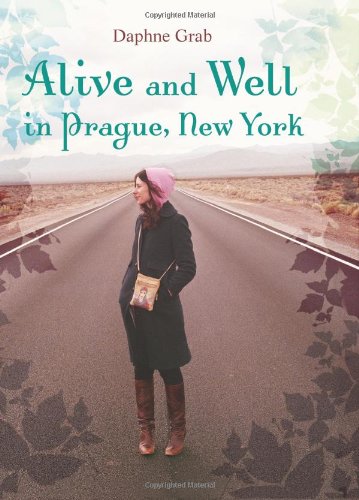