Voltaire was truly a merciless author. Candide, his short novella, questions large events and key characteristics of the 18th century by throwing them all onto a blissfully oblivious young man named Candide, for whom the work is named after. Candide is constantly barraged with hardships and sorrows, but in the end benefits from a major transformation of perspective. This journey of enlightenment is encouraged by Voltaire, and is meant to illustrate the changes he deemed were necessary for society at the time. Candide faces a sundry of events and meets an even greater variety of new people, all of which Voltaire discusses and derides. But out of the plethora of factors, his experience with the Bulgars, the Lisbon earthquake, and the Inquisition, is most influential in causing him to leave behind the “best of all worlds” theory, based on Leibniz’s optimistic views, which he previously lived by, and instead focus on working diligently, as Voltaire hoped others would do as well.
Candide is a character many would deem ignorant or foolish. However, his way of life, which Dr. Pangloss, his mentor preaches, was actually going strong in the real world as well. Gottfried Leibniz, a philosopher from the 18th century, was essentially a living, breathing Dr. Pangloss. He claimed the world was the best of all possible worlds, and because it was created by a perfect God, all the calamities and catastrophes are meant to occur for the best. While this scarily optimistic view was popular to some, Voltaire was much in disagreement, and preferred the idea that people instead live simply and honestly by working. This is the central idea that continues through the length of the book, starting with Candide’s experience with the Bulgars.

Candide is first shaken from his life of ease and comfort by the Bulgars. Although he is exposed to fatal flaws in human nature, such as violence and cruelty, he leaves the Bulgars still looking at the glass half full, when any other functioning human would have clearly spotted the inch long crack forming near its transparent base. Candide is exposed to horrific deaths, brutal treatment, and general disaster that occur with war any way. On a personal level, upon his return, he finds that the world he knew before is gone; his mentor, Pangloss, has been reduced to a sickly beggar, the castle he called home has been destroyed, the Baron and his family have been killed, and most importantly his love Cunegonde has been callously attacked before her reported death. These events, all based on the Seven Years’ War, are meant to bring up the first flaw in Leibniz’ optimistic views, if they are correct, then why do such cruel events take place in the world? Although Candide is not immediately awakened from his dream-like state of living, his run in with the Bulgars is the catalyst that starts his shift in thinking.
The Lisbon Earthquake of 1755 shook the world in many ways. It broke the spell that many philosophers were enchanted by, because it was a complete stand against all that optimism taught. Voltaire was one such philosopher that experienced the awakening, which is why Candide too experiences it. Again, Candide views pandemonium during the Lisbon earthquake. “Large sheets of flames and cinders covered the streets and public places; the houses tottered, and were tumbled topsy-turvy even to their foundations, which were themselves destroyed, and thirty thousand inhabitants of both sexes, young and old, were buried beneath the ruins.” (Chapter 5) Similar to the Bulgars, the Lisbon Earthquake creates a level of reality in Candide’s mind. It helps to provide contrast to the bright existence he thought the world to be.
Ignorance and hatred to those different than us has been a human characteristic, a road to discrimination and death, found throughout history’s lifespan. The Inquisition, which Candide falls victim to, does not stray from this ancient, well worn path. He and Dr. Pangloss, as well as other “heretics” act as the stars in an auto de fé. Yet again, Candide manages to barely escape with his life; however, he watches his dear mentor be hanged. His execution is not justifiable, nor did it comply with the theory that all is done for the best. “Candide, amazed, terrified, confounded, astonished, all bloody, and trembling from head to foot, said to himself, "If this is the best of all possible worlds, what are the others? If I had only been whipped, I could have put up with it, as I did among the Bulgarians; but, not withstanding, oh my dear Pangloss! my beloved master! thou greatest of philosophers! that ever I should live to see thee hanged, without knowing for what!” (Chapter 6) Finally, from this event, Candide is able to question constant optimism, and grasp its foolishness. By the end of Candide, Candide lets the optimistic theory, so heavily dependent on a perfect God, go, and adopts a newer, work-based lifestyle. He exemplifies the change Voltaire hoped to see society from the 18th century transition through, albeit Candide is probably more physically and mentally traumatized than any other person in real life or literature. (But isn’t a complete transformation and enlightenment worth it?) 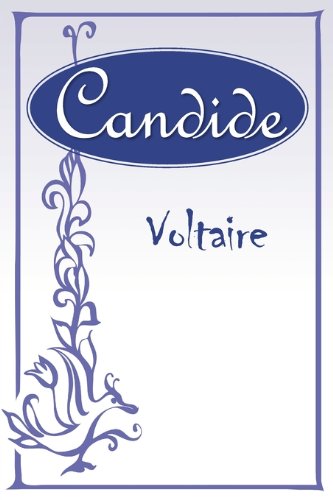