In the Chicago Yellow Pages, there is an entry that reads Harry Dresden, professional wizard. Yes, he does magic. No, he does not do birthday parties. No, he is not a fake. If he was, maybe he wouldn’t be attacked by homicidal sadistic monsters quite so often. But Harry has long resigned himself to the fact his better nature wins out against his sense of self-preservation more often than not. Well, as long as he doesn’t join the dark side, anyways.

This book is part urban fantasy, part detective fiction, and takes place in a world that looks normal on the outside by actually has a whole bunch of magic-users and strange creatures crawling around in it. Harry is often asked by the Chicago Police Department’s Special Investigations unit to look into paranormal crimes—this time, a bizarre and gruesome double murder. Throw in a vampire, a human gangster, and a woman who has hired Harry to look for her husband, and all the ingredients are there for a suspenseful decent into chaos.

There’s a bit of everything in this book, such as giant scorpions, hot girls, magical drugs, angry police officers, and a perverted air spirit named Bob who lives inside a skull. But most entertaining is the first-person narration by Harry Dresden, who is snarky and sarcastic, often at inconvenient moments, and drives himself crazy with his own morals.

Storm Front is the first book in the Dresden Files series, currently at about eleven books long and still growing. The next one’s about werewolves—about six different kinds. 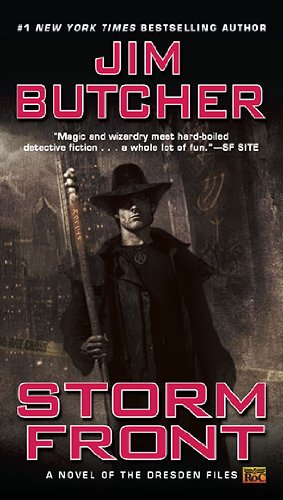 
Buy from Amazon
The author's comments:
These books are pretty awesome, if less-than-appropriate. I've read, like, four of the first six, because my friend I'm borrowing them off of keeps losing her books. Noooo, sacrilege!
Post a comment
Submit your own