Far in Earth’s future, our planet has already barely survived two invasions from an alien race, but a third encounter is inevitable. For the sake of humanity, the entire world tests their children and sends their geniuses at a very young age to the Battle School, where they are trained to one day captain the star fleet that will defend Earth from the aliens. And what better training than by fighting each other in endless battle games?

One such child is Ender Wiggin, the smartest of them all, who after a shaky beginning proves himself not only a tactical prodigy but also a natural leader. He is quickly embroiled in the highly competitive world of the Battle School, making both true friends as well as bitter enemies who resent his rapid rise in the school’s hierarchy and are determined to see him fall. Yet Ender is also in constant turmoil with himself—his self-sufficiency and loneliness, compassion and potential for brutality, the weight of being chosen to save the world.

This book is pretty much sci-fi, in a psychological and metaphorical and sometimes just plain creepy sort of way. The dreams are lurid, the “real world” outside of the Battle School its own philosophical battleground, and the characters—largely pre-teens—are scarier than most adults. There are some pretty cool fight scenes and technology, but Ender’s Game is not light reading for the faint of heart. But it just might be the sort of book that sticks with you.

There’s a companion book, Ender’s Shadow, told from the view of Ender’s sidekick and possibly even better than the original, plus a whole lot of sequels I will someday get around to reading. 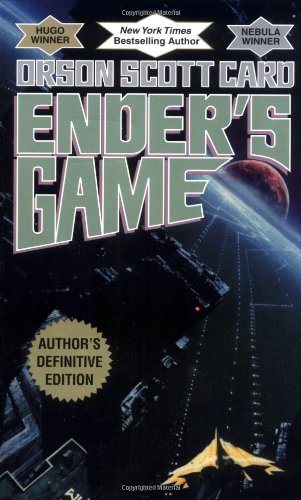 
Buy from Amazon
The author's comments:
Creepy-cool book. I really, really have to read the rest of the series. *sigh* There's never enough time.
Post a comment
Submit your own