The Golden Compass by Philip Pullman

A land, not like ours, yet similar in ways, is in panic. Children are disappearing. Life threatening “Dust” has created fear among the ruling Magisterium. Witches choose sides where they will slaughter those that oppose them. Death roams the gloomy air. The only hope is a young girl who will win or loose this war of the worlds. Philip Pullman using his wild yet creative imagination has illustrated a fantasy sure to be bookshelves for centuries to come. The Golden Compass, the first edition to the breathtaking series, is a well-written and pulse-pounding classic.

Children-stealing Gobblers. Population-threatening “Dust”. Shapeshifting-animal daemons. How do these mysterious objects tie together? Our journey begins with Lyra Belaqua and her daemon Pantalaimon, who hurdle towards the North, trying to escape from the clutches of the evil Mrs. Coulter, in search for Lyra's beloved, yet different friend Roger (Lyra is supposedly royalty, and Roger is a kitchen boy). Lyra's suspicions of the North are true – Gobblers have taken Roger to far lands of Bolvangar. As Lyra travels to the North with her Gyptian friends, an old aeronaut Lee Scoresby, Serafinna Pekala the witch, and her new befriended ice-bear, you witness as the author, Philip Pullman, paints his theme of friendship, that even the most different of people can be the best of friends. With that, Lyra battles forward, unaware of what her gift, the golden compass is capable of, but far more importantly, unaware of what is soon to come.

Lyra and Pantalaimon, the main characters of the story, are adventurous and gutsy, not to mention absolutely unforgettable. As we begin our journey, Lyra is headstrong and fearless – hiding in closets, spying on suspects, running on roofs of buildings, while Pantalaimon, her friend and daemon, embodies an exact opposite of her – scared, concerned, and cautious of surroundings. However, as we continue along, we find a weaker Lyra that seems more fragile and similar to Pantalaimon. A daemon always represents the inner soul of its owner. As Lyra grows, we see she loses her mask and adapts to her true self, when Pantailaimon had displayed it all along. The author has created a believable, lovable character that the reader feels a connection with. As I was reading, my heart beated along with Lyra's. Lyra's courage in taking risks, independence, and often dangerous curiosity is what keeps the plot alive.

Mrs. Coulter, evil yet “glamorous”, is one of the most intricately created characters of the book. As we read, we have a strong wanting of Mrs. Coulter not to be a villain, yet her evil ways force her us to do so. Lyra's feeling of “Mrs. Coulter's air of glamour that entrances” is contagious. As we follow along, not many notice that Mrs. Coulter isn't necessarily doing what she wants to, but what she thinks as is for “the greater good”. The author tries to tell us that sometimes, choices are damaging either way; you just have to make the choice that does less damage. However, because the choice is still negative, you find hatred among others. You could find the character of Mrs. Coulter in life. Philip Pullman perhaps has based the character of Mrs. Coulter on certain people from today's society.

Philip Pullman paints his adventure; his inspiration is creativity, just as his brush are his words. Pullman's illustration, The Golden Compass, is surely a sight to behold. His style is very unique. He drags on the suspense parts to create tension, but merely accents the informational parts, giving you the background needed so we understand what is going on, without useless sentences that make the situation boring and pointless. One of his other strategies that build upon his style are his “suspense bombs”. These “bombs” land at just the right timings, and are spaced to not have clumps of neutral and climatic settings. His world-famous “atomic bombs” explode with a cloud of anxiety. These bombs come at the end of chapters immediately capturing the reader's attention, using stern, strongly stated sentences to attract questions and leave that “bu-bump” beat in your heart, similar to the kind you find in horror movie right when the helpless girl pens the closet in the haunted house – except, not as expected. Philip Pullman, combining his “suspense bombs”, creativity, and wonderful figurative language, creates a book that will leave you jaw-dropped.

If a book won 10 awards, was made into a major-motion picture, and received 17 honorable mentions, my prescriptions are to read it! The target market for this book is mainly focused on Young Adults, however any adult's sophisticated mind, in my opinion, could also be captured with Pullman's breathtaking craftsmanship. Philip Pullman clearly grasped the idea of children's love in the fantasy genre, and The Golden Compass is surely another tale for Harry Potter, Artemis Fowl, and Lord of the Rings lovers. In the long run, for those that want a long lasting book, this is the book right here. You will find that this leaves questions unanswered, that is, until you read the whole series. You will find yourself captivated by the battle scenes, overturned by the rollercoaster plot, and undone by the courage of the brave beloved characters. 5 out of 5 stars? Skrew that rating system! 400 out of 400 pages are what you'll be reading!

In conclusion, The Golden Compass is something definitely worth reading. The story's theme, characters, and style are all uniquely and intricately written. From the children disappearing, to the life-threatening “Dust”, down to the mysterious golden compass itself, you will find yourself captivated and suspended on this rollercoaster of a ride. Since the witch clans, ice bears, and daemons have foretold this destiny, than shall be it! The Golden Compass, Philip Pullman's award-winning fantasy, is destined to be a classic placed on bookshelves for years to come. 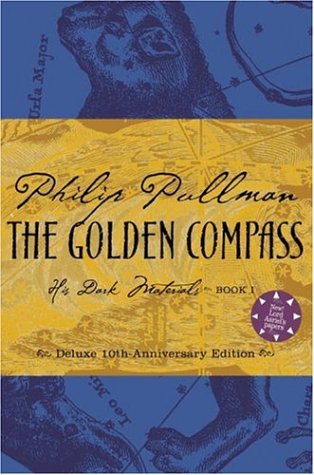