Death Note could be considered the Japanese Catcher in the Rye, with its growing reputation of as the root cause for a murder and the fact that it has been banned in schools all over the world. But this 12-volume graphic novel series is filled with suspenseful psychological thrills, and although it has glaringly controversial views, is sure to ensnare any reader's interest.

Light Yagami is an incredibly bright Japanese high school student who aspires to be a policeman, like his father. In fact, he not only excels in academics, but at sports as well. Oh, he's popular with the ladies. All in all, Light is perfect in every way. Yet despite his great mental prowess, bringing justice upon the unscrupulous seemed like a faraway dream- that is, until Light finds a mysterious black notebook lying on the ground.
After, Light finds out this is no ordinary notebook. The “rules” of the notebook states, “the person whose name is written in this notebook shall die.” Although Light is initially doubtful about the notebook's claim, after experimenting on two criminals, he realized that the power of the notebook was all too real.
As if discovering a weapon capable of mass murder wasn't enough shock for one day, Light also encounters Ryuk, a ghastly Shinigami (Death God of Japanese legend) to whom the Death Note just happens to belong to. To his surprise, Ryuk has no problem with Light using the Death Note- in fact; he's so bored by his mundane death god lifestyle that he's going to stick around on Earth with Light! Now, with the Death Note safely in his possession, Light seeks to rid the world of all wrong-doers, and ultimately become “the God of a new world.”

Of course, criminals' dropping dead left and right worldwide doesn't go unnoticed by the police. Soon, the Japanese police summons the mysterious “L”, an anonymous detective who had helped solve many complicated and high-profile cases before. L quickly narrows the position of the serial killer, known as “Kira” to the public (derived from the English world “Killer”), to Japan. By examining Kira's murder patterns, he deduces that Kira can kill by seeing the victims' faces and knowing their names. As L seems to be drawing ever closer to discovering Kira's identity, Light also has a chance to let his strategic mastermind shine, cleverly forcing an FBI agent to reveal his identity and using him to kill the 12 other FBI agents that had been dispatched to search of Kira in Japan. Now that both Light and L realize that they are each other's psychological nemesis, an intense game of skill, strategy and control begins.

Death Note takes a refreshing new angle in storytelling, taking the perspective of the “bad guy”, (mass-murderer Kira,) instead of the “good guy”, (the mysterious L.) It shows us the thoughts and hopes of Light, who, no matter how many English teachers will argue, is truly the antagonist of the story. Instead of reinforcing morals that we've already been taught, such as “murder is a horrible thing” it questions these fundamental morals. Is killing truly wrong, if you are doing it for a greater good? What is a greater good, anyway?
Although both main characters are amazingly talented and intelligent, we also see the human flaws in them- or at least, we do in Light. For example, in the beginning of the series, Light really is striving to make the world a better place, although his methods are a bit unorthodox. But as the series progresses and Light comes closer and closer to discovering L's identity, he slowly loses his grasp of his original goal and begins killing anyone who may endanger his safety or that is against his cause… uh, can we say dictatorship, Light?

The setting of this series also adds to the intensity and realism of Light and L's rivalry. In Tokyo, Japan, the city teeming with humanity is starkly divided: those who support Kira's utopist vision and those who side with the police. As Light predicts, Kira supporters also begin creating websites, hailing him as the ultimate savior while all too afraid to speak out about their beliefs in public.

In addition to presenting its readers with believable characters and an engaging plot, Death Note also succeeds in the art department. Artist Takeshi Obata uses a semi-realistic style that renders the characters and setting just proportionate enough to exist in real life, and yet still retaining a manga-esque (huge-eyed pointy nose, little or no mouth) feel.

All in all, there has never been anything quite as gripping as the story that unfolds behind the covers of the Death Note manga. I recommend it to anyone who has an open mind and a liking of detective stories a la Agatha Christie. The dramatic plot twists and the incredibly fleshed-out characters that make this story truly a worthwhile read. 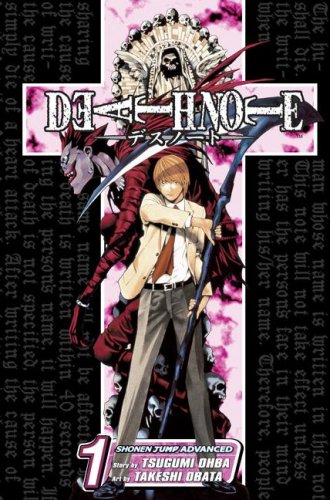 Favorite Quote:
If this is love I don't wanna be loved.- Get Scared

View profile
I just started volume five. This is seriously the most addictive thing I've ever read since Harry Potter! The sad part is, I discovered Death Note it by finding out the ending. *Dang it!* But this is one of the first Mangas I've ever read and I'm hooked!
Blaague said...
on May. 18 2010 at 2:10 pm
I love this manga!!
Hannataro said...
on Oct. 27 2008 at 3:33 pm
Cool,