Stormbreaker is most easily described as a James Bond movie in written form and starring a teenager. Filled with dastardly monologuing villains, incredible high-tech gadgets, and many varied and unique methods of killing people, this book is an action-packed non-stop thriller.

Alex Rider, orphan, thought he was more or less a normal British kid until his guardian, his uncle, dies of a “car accident”, aka gets shot by an assassin. So it turns out said uncle worked for the spy agency MI6, and now the people there force him to finish his uncle’s mission—investigate the billionaire Herod Sayle, who suspiciously wants to give a free and very fancy “Stormbreaker” computer to every school in Britain. Alex gets trained in a hurry, and then is shipped undercover to find out about the super rich guy’s motivations. Needless to say, they are not benign.

Featuring such delightful moments as “Alex being locked in a tank with a poisonous Portuguese Man o’ War”, “Alex parachuting out of a hijacked helicopter”, and “Alex shooting the Prime Minister”, Stormbreaker is guaranteed to leave you on the edge of your seat from start to finish. It really does have all the entertainment value of a Bond movie. Just don’t expect deep character development or even semi-realistic plot, okay? ‘Cause really, who cares about reality when Alex Rider, fourteen-year-old spy, is saving Great Britain?

This book is the first of the Alex Rider series, which largely follow the pattern of this first one, growing steadily more improbable, and dramatic, as the series continues. I mean, he even has a fight in space with a crazy assassin with a knife. And he meets a girl. Have fun~ 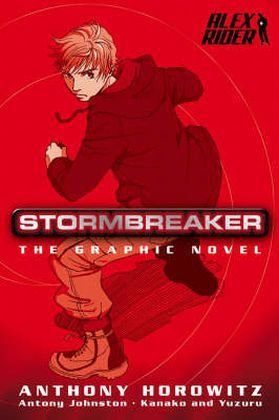 
Buy from Amazon
The author's comments:
Heh, these books read way better in sixth grade. I gave up after about the fifth one, actually. But they were entertaining.
Post a comment
Submit your own