Freak the Mighty by Rodman Philbrick

Throughout his whole life, Max was called slow, stupid, and didn't really have anyone to be there for him. His mother was killed by his father in front of his own eyes and he is often compared to his killer dad because of their similar appearance. Max is sent to live with his grandparents who he refers to as Grim and Gram and has a room all to himself in the basement of their house. One day, a new neighbor moves in and Max meets finds a new friend called Kevin. The problem is, Kevin is very short for his age, earning him the nickname Freak, and lives in a world of his own. He tells Max that the only reason why he goes to the hospital on most days is because they are building a new robotic body for him. The two soon become inseparable and Freak usually rides on Max's shoulders. Together, Freak and Max would devise quick plans for when they are in trouble, especially when they run into the town bully, Tony D. As Max's and Freak's friendship progress, Max is kidnapped by his father and his father tells him that he had never killed anyone before, that he's innocent. It is not until Max sees his father choke the death out of one of his friends, Loretta, does he finally have the courage to tell his father that he saw him kill his mother, and that he will never forget it no matter how hard he tries to. Max's father is filled with rage and just as he was about to strangle the life out of his own son, Freak comes to the rescue. Freak points a water gun at Max's father and tells him that it's a fatal chemical though it's only vinegar and water, and when he shoots it into Max's father's eyes, Max has the chance to run away and his dad is caught by the police. Afterward, Max's father ends up having to finish the rest of his jail sentence plus ten more years. Freak's birthday is coming up and everyone is getting ready for his special day. On Freak's birthday, everybody is enjoying themselves when Freak suddenly starts choking and suffers a seizure. He is immediately rushed to the hospital and everybody is devastated. When Max comes to visit Freak, Freak hands him an empty book and tells him to fill it with all their adventures before both of them forget the fun memories that they both shared. He also tells Max that he is finally getting his new robotic body. Freak ends up dying and the nurse explains to Max that his heart just got too big for his body. Max also learns that Freak knew that he was going to die soon, but making up adventures and how he was going to get a new robotic body was his hope.

This book was one of the most attention-grabbing books that I have ever read, not just because of the twists and turns the book presents, but also the life lessons that it provides. This book shows me that just because someone looks different from you, whether they're enormous or very short, it doesn't mean that they're different on the inside too. Also, nobody should be called dumb or slow because everybody is capable of anything that they want to do. Like Max, some people just needed a helping hand, a little push to achieve their goals. What really interested me about this book was that Freak would rather hold on to a huge lie then to tell himself the truth, and that shows vulnerability. It shows people that we all deal with the same problems, just in our own way. 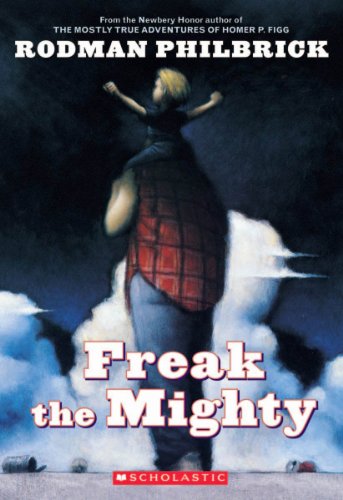 sallysunshine said...
on Feb. 21 2013 at 8:26 am
Book Review Outline Book title and author:  Freak Then Mighty by, Rodman Philbrick Title of review  ‘Freak The Mighty’ Number of stars (1 to 5): 5   Introduction Freak the Mighty is about two children who are kind of freaks but find the good in each other and become best friends. Description and summary of main points Overcome obstacles and challenges in everyday daily life. Evaluation Freak starts to get sick of disease  where he grows but his inside doesn’t. Conclusion Freak dies in a hospital of the same disease Your final review They go on tons of adventures. There are action and interesting twists. I liked this book very much. It kept me interested the whole time i was reading this book. It has adventures, friendship, happiness and sadness.  There was nothing in this book i didn’t like. I recommend this book for everyone. I give this book a five star rating.
im-a-college-person said...
on Oct. 1 2012 at 10:16 pm
i like this book....... as a mater a fact im reading this book right now in my reading class at maureen joy!