“Our feeds were clear again from all the moon banners, so for a long time we all watched the football game while the girls, they did something else on the feed. They were chatting each other and we couldn’t hear them, but they kept laughing and touching each other’s faces. I wanted to go to sleep, but every time I tried, bam! Link and Marty would suddenly go all fission on me, saying, “Titus! Did you see that? Did you see Hemmacher?” I tried to tell myself that being here was not re: sleeping but re: being with your friends and doing great stuff. I tried to concentrate on all the stimulus, and the fun, all of it.”


In a futuristic world where people can take day trips to the moon, live on other planets, and have information available in literally the blink of an eye, Titus is bored. The moon was not what he and his friends thought it would be. He got to meet Violet, yes, but they also met a hacker, who hacked the feeds in their brains and totally disrupted its connection. The feed is everything. The feed is life. The feed is how everyone stays connected to each other. Without the feed, they are nothing. Titus and Violet start to fall in love, but when they’re able to get back online, they realize that something went very wrong with Violet’s feed, and they don’t think they’ll be able to fix it.


This book reminds me a lot of the book 1984 because it shows us what dark, dreary path we may be headed down, and how horrible our futures could be if we don’t act now to turn away from that path and find an alternative. Everyone basically has an internet connection in their heads that runs nonstop, and intelligence quickly becomes irrelevant because all the information anyone could ever need is there the second they need it. Feed shows us how today’s society’s quest for bigger and better technology may actually become the downfall of our society – our language skills could deteriorate, our critical thinking skills could deteriorate, even the ability to control our bodies could deteriorate. Feed is a must-read book for everyone growing up in this age of technology, because it shows us how we much we could damage ourselves with all of these gadgets and gizmos. Anyone older than sixth grade should be able to handle the content and language of this book, though I believe it was written for high schoolers. If you haven’t read Feed, go to your local library and get it now, because this is a future we certainly don’t want for ourselves.


I GIVE THIS BOOK FIVE OUT OF FIVE STARS 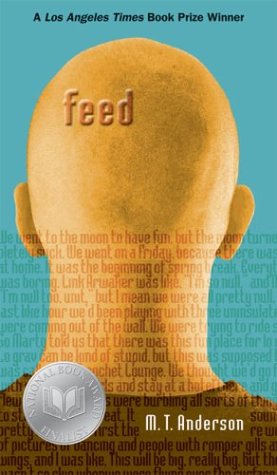 
Buy from Amazon
The author's comments:
I've been writing book reviews for a while now, and this is one of the ones that I have read recently. I hope that people read this and see how dangerous technology can be if we let it rule our lives.
Post a comment
Submit your own