I was roaming the library with a stack of books under my arm when a paper on the bulletin board caught my attention. It was a list of books recommended for young adults. I quickly skimmed it and one title caught my eye: The Lightning Thief. It may have seemed special because it was at the top of the list, but there was a storm brewing outside at that moment. I quietly stepped out of line and went to find the book. After checking out, I headed home, surprised at how excited I was to read it.

The Lightning Thief is the first book in the Percy Jackson series. Imagine the Greek gods had children who became great heroes. Well, Percy Jackson is one of them and this is his story. He is a 12-year-old middle-schooler who often feels like an oddball. He has been kicked out of every school he's attended and believes he's just a troubled kid until he discovers that he's only half human. His mother is a mortal but his father is one of the Greek gods. Although the world doesn't know it, the Greek gods still rule, but this time from the 600th floor of the Empire State Building in New York City. Their children, demigods, live among humans.

After a number of strange events, Percy is sent to a ­summer camp filled with kids just like him. There, he learns that he's the son of Poseidon and goes on a quest to the ­underworld with his best friend Grover, a Satyr, and Annabethe, a daughter of Athena, in order to resolve a dispute between Zeus and Poseidon over Zeus's stolen lightning bolt. In the process he learns that his weaknesses in the mortal world can be strengths as a demigod, and also finds true friendship.

This book is a fast-paced page-turner. I liked that
every character has a distinct personality and role. Many
of you have probably either heard about this book or have seen the movie, but if you haven't read it yet, I strongly recommend it. 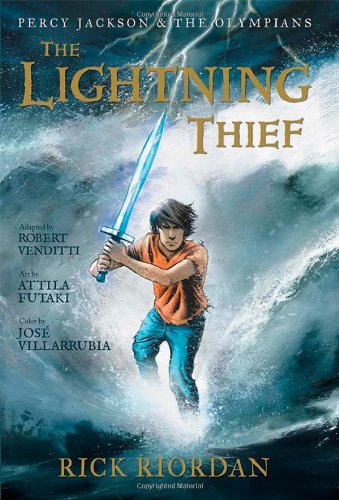 I have read the entire series, and i agree with you completely. The series really successfully incorporates ancient myth into modern society.

This review is a great way to describe this. After reading this, i want to read the entire series once again.