Bullying happens in every school. Some schools are effective in dealing with it; others are not. It can range from the obvious – schoolyard teasing, hitting, and accidental tripping – to the less obvious but no less traumatizing: cyber-bulling. Using phones and the Internet, the bullies taunt, threaten, and spread obscene rumors, confident that their identities won't be discovered. For some, the constant victimization is too much, and they are driven to consider suicide.

This is what happens to Avalon Maloney. Reluctantly agreeing to move to Perth, Australia, where her mother has a new job as a math teacher, Avalon hopes it won't be so bad. However, she couldn't be more wrong. From the first day, she is targeted by cyberbullies through chat rooms and online message boards, where rumors are spread about her social and private life. She soon comes to hate her new phone, which constantly beeps, announcing more obscene messages.

Her only support comes from friends, all outcasts too. They treat her with respect and kindness, supporting her through the toughest days, despite being targets themselves. Marshall, one of the group, is always so positive and full of life that Avalon is drawn to him. As the vicious attacks increase, she begins to question whether anyone is safe from bullies.

I loved this book. It's insightful and disturbing at times, but sadly it's a very accurate portrayal of a bullying victim's life and the relief of finally speaking out and ending the torment. The story is told in first person and is totally believable. Bullying is not going to go away if we ignore it. This book reminds readers that if you are being bullied, someone will always help you. 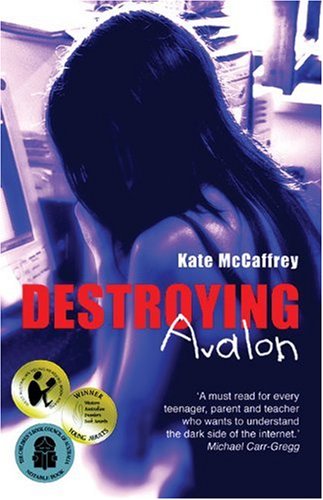 View profile
Great review!  I like the introduction and you summarize the book very well (maybe a bit too much summary, though).  You might want to put in a bit more opinion in the end.
Anon said...
on May. 5 2011 at 3:17 pm

The review is written well, but I would not be one to consider it accurate. At the ripe age of fifteen myself, I decided to read this book as another English class in my school were given it to read and I had been given mixed opinions about it. I decided to dwelve in and discover the book's true nature myself.

The idea and plot of this book is simple, but is definately enough to warrant and keep my interest, which is a positive. Not to mention the believeable characters, another pro.

However, to me, the environment and situations these characters were placed in was most definately not believeable. Also, the 'text-talk' used within the book is attrocious, but I'll excuse that for this comment.

The author seems to believe school still very well functions on a social ladder, with each rung harbouring a diferent type and class of students.  This is still true in most schools, as it is in life, however it is not as evident as Kate believes it to be. The 'rejects' talk of the school being split into different grades (i.e. A, B, C...) where the 'A  grade' (the most popular and generally the most malicious type of people) rule the school. In real life schools, linguistic acknowledgement of a such a thing is not that common.

The book also carries a very distinct vibe of exaggeration, as Kate stretches characters' personality traits to very far extents. The mean and abusive teenagers, instead of being subtle and swift in their insults, end up simply sending buckets of hate mail through to Avalon and her friends' addresses. And I mean buckets. Infact, Avalon and her friends seem to be the only people of whom act normal in the school. And you can't honestly tell me that out of 1000+ people  in that school that there are only five nice people.

*note, I'm getting pretty tired at this point, sorry for the decline in quality*

Also, the author could've been a lot more creative in the execution of the story.  A lot of what happens is not believeable. I don't believe half of what Marshall wrote down in his diary simply because of how it is written (the language - not the font people). The boys giving him a 'shave' in the locker room is idiotic, as it is safe to say that such homophobic people would not go to such stupid extents. It is contradictory and just wouldn't happen. Also, the suicide in the story is superflous, and is more of a cop-out so that the author does not have to show how all the conflict in the book is resolved, rather, she can just write that everyone was so stunned they immediately shut-up and stopped the abuse. Way to teach us how to solve our problems.

It is a pity that this book is sub-standard. I (judging by the blurb) was somewhat expecting a lecture about the dangers of bullying (and especially cyber-bullying), but not the extent that I was given. Characters seem to focus literally all  of their attention on our poor-old protagonists, and are made to seem all that more hateful just so we, the viewers, feel sorry for them and learn the dangers of bullying ourselves. The concept was good, but I've read tonnes of fiction about extremely similar topics which were of much higher quality.

(tl; dr) Not terrible, and enough for me to develop emotional investment within the novel and its characters (just enough so that when the character of whom commits suicide does so, I feel bad and somewhat empty), but a mostly unrealistic book nevertheless. Kate needs a better idea of how school and school abuse functions.

Favorite Quote:
"I think that if I ever have kids, and they are upset, I won't tell them people are starving in China or anything like that because it won't change the fact that they were upset. And even if someone has it much worse, that doesn't really change the fact that you have what you have. Good and bad."
- The Perks of Being a Wallflower, by Stephen Chbosky

This is one of my favourite books. It's the second book that has ever made me cry. It's relateable (not to me personally, but to many teens), which is what makes the emotion so strong. That's something about teen fiction that's hard to find in other places. The writing isn't as good as the classics, or adult novels, but the story is something that we can relate to, that we can really feel.

Good review, I think you explained things quite well. If you want to improve on your review techniques, then you could always search "review writing" or something similar and see what comes up. I don't have any more helpful suggestions than that. But you did a good job of summing up the contents of this book.

This was a good review, it definitely managed to get me interested in a book I've never heard of before.

Cyberbullying is a growing issue and I am glad authors are facing it head on.

I wouldn't mind learning more about the writing style and narrative, kind of what to expect from the book.

Does the book hit on the oft forgotten fact that cyberbulling only becomes a problem when it is people you know in person who are initiating it? I don't think there has been a case of Bullycide from absolute strangers over the internet where the victim didn't already have problems building.