A Murder At Mansfield Park by Lynn Shepherd | Teen Ink

A Murder At Mansfield Park by Lynn Shepherd

Years ago, when, after dragging myself through what I have since come to think of as the literary equivalent of quicksand, I slammed the front and back cover of Jane Austen's Mansfield Park together for the first and last time and in a fit of frustration shoved the offensive thing back into it's place on my bookshelf, I swore to everyone who would hear me that I would never return to that place again. Words cannot express how much I adore the works of Jane Austen: I am a Janeite in the purest sense and will hear not one unpleasant word spoken against her: save for a discussion on Mansfield Park. I could not --- I literally *could not* enjoy the book. It was a physical impossibility. Had someone have offered me a million dollars to say something positive about Mansfield Park, I would have forever gone hungry. Jane Austen once said of Emma Woodhouse that she wrote "a heroine who no-one but myself will much like." Contrarily, I am an ardent admirer of Emma and consider Fanny Price to be the black sheep of Austen heroines. Even Jane Austen's mother could not like Fanny Price, considering her "insipid", which is, in my opinion, the nicest way of describing that self-righteous chit as I have ever heard. I cannot....I literally cannot approve of Mansfield Park.

*A Murder* At Mansfield Park, on the other hand, is the perfect antidote to the lethargic illness which seeps into the bones of whomever is shoved into the way of the insipid Fanny Price. Lynn Shepherd has, in writing such a clever, entertaining, humorous, and enjoyable tale, achieved the impossible Herculean feat of tempting a once-bitten-twice-shy reader such as myself back through the ominous gates of Mansfield Park. She has successfully taken a story which could send even the most faithful Regency readers straight to sleep and turned it into a fast-paced, witty, brilliant tale that all Jane Austen fans will praise as the perfect answer to Jane's Fanny Price.

In Ms. Shepherd's variation, Mary Crawford, the spoiled, vindictive, Caroline-Bingley-esque socialite of the original Mansfield Park, is the sweet, amiable, likeable character that I'm sure Jane had originally intended her Fanny Price to be --- she just fell a bit short off of the mark. Contrarily, in the character of Fanny Price, Lynn Shepherd has given we Fanny-dislikers what we have always wanted: a *reason* to hate to this woman. Jane Austen was excellent at writing villains, men and women alike, and she was always obvious about which was the villain and which was the heroine. In Mansfield Park, however, even though Mary Crawford was clearly intended to be the villain, readers ended up disliking Fanny Price instead --- and we don't know why! The woman is not intended to be a horrible beasty hag who ruins the lives of the people around her; and yet we cannot like her. In fact, I think (and I know as much when speaking for myself) we would like her more if she had been a bit more saucy. In Murder At Mansfield Park, Fanny Price is not merely saucy: she is downright evil. She is as venomous as a cobra, unlikeable in every way, and I can tell you from personal experience, it feels *fantastic* to be able to feel antagonistic toward the girl and not feel guilty because you know that you're not supposed to. Lynn Shepherd created something magical with her PC keyboard: something practically otherwordly in how well the entire structure holds together.

In Murder At Mansfield Park, fans get exactly what they wanted out of the original story and more. We get a good, worthy heroine designed by the infamous schematic of classic Jane Austen heroines. We get a villain who gets her due, even if more violently than Jane Austen ever considered possible. We get a set of strong, believable, entertaining supporting characters who, if nothing else, serve as an excuse to incite us do what Jane always encouraged: delight in the ridiculous.

Between the black and white pages of this remarkable work of fiction are the echoes of Jane's world: her ideas, her words, her characters, and, most importantly, her vibrant, witty spirit that defines the attraction toward her works which ensnares all Janeites. Lynn Shepherd was not only loyal to Jane's memory, she was loyal to Jane's soul. Murder At Mansfield Park is an instant classic amongst Austen continuations and sequels, and I am certain that I am not alone in the hope that this novel is not the last word that we hear from the remarkable Lynn Shepherd. 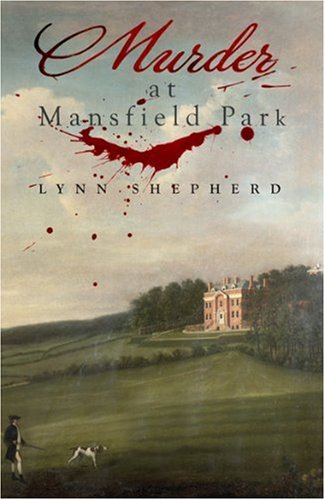 
Buy from Amazon
The author's comments:
I think that Jane would have approved.
Post a comment
Submit your own