Overall, Becoming Naomi Leon, was a great story about the wonders of family, love,
culture, and believing in your dreams. It was an inspirational book that can really teach you a lot. I think it showed a good point of view of the hardship’s some people go through it also showed how one event in life can lead to a journey, and it can lead to something truly great. It also
showed how to embrace life and find the silver lining in any situation, but most importantly, to be grateful for everything you have and the people standing next to you and supporting you. I
liked Naomi’s personality in the book and I liked the mention and visualization of Mexican
culture outside of a typical perspective.


Firstly, I think Naomi was a very strong character. To grow up with her great grandmother and have to deal with being abandoned by her parents would really be a hard emotional thing to deal with. If I was put in her situation, I don’t think that I could have been half as strong or as willed as she was in the search for her father. Going through a betrayal from
family, let alone her mother, would be a terrible thing to cope with. As a child I had a pretty easy childhood and to read about another kid with a totally different way of life is really a reality check to how good you have it. I have had the blessing of growing up with both my parents and it is honestly too much emotion to even try to wrap my head around, none the less try to imagine being put in her shoes. I liked her personality and the way she could cope with things and how
she was a realistic, yet quirky character that kids could relate with.This is why I found Naomi
Leon a great character.

Secondly, the main conflict in the story was Naomi, her gran, and her way of life versus the
arrival of her mother and the absence of Naomi’s dad in her life. When Naomi’s mother
interrupted their way of life it put a lot of things in motion. It led to finding out the troubles that haunt her mom and to figuring out that she was just an evil person. It also led to finding Naomi’s dad when they went on a whirl-wind journey to Mexico. It led to a great climax and a great
ending in the story.

It shows some of the celebrations that the families in Mexico celebrate. It shows the good
culture of Mexico, the traditional and spiritual side of it. On the other hand, the portrayal of the
culture in America is a lot different that what it is like in Mexico. Also, I think that it shows the hard, struggling part of America. I think the interaction of a Mexican-American girl going to Oaxaca, Mexico in search of her father was a very interesting juxtaposition. It really showed the difference of the two cultures. This is why liked the visualization of Mexican culture.

In conclusion, I found Becoming Naomi Leon a great story. I liked it because of it illustrated and gave the reader a new untypical view of the wonders of family, culture, the journey of life and having a dream and going for it. It was an inspirational book and it really taught you a lot and you could really connect with the emotion of the characters. I liked Naomi’s personality in the book and I liked the mention and visualization of Mexican culture outside of a typical perspective. I think it showed a good point of view of the hardship’s some people go through it also showed how there is always going to be a light at the end of the tunnel, that things always have to get worse before they can get better. It showed how to embrace life and find the silver lining in any situation, but most importantly, to be grateful for the people in your life that will always stand supporting and loving you. This is why I liked the book Becoming Naomi
Leon. 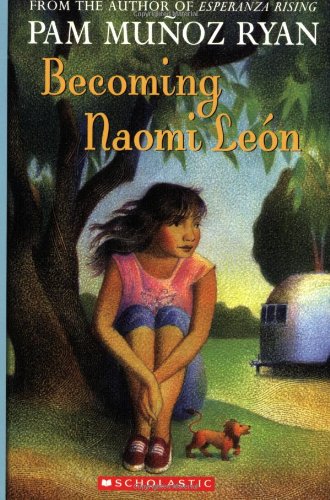