Percy Jackson and the Olympians: The Lightning Thief by Rick Riordan | Teen Ink

Percy Jackson and the Olympians: The Lightning Thief by Rick Riordan

The unique twist on the average fictional adventure that is Rick Riordan’s Percy Jackson and the Olympions series is phenomenal. During the writing of his Tres Navarre series, this started as a story to his son. On this Earth, the Greek gods have always and still exist, their kids(demigods) go to Camp Half-Blood on Long Island to learn how to survive. The gods move, now in America, 12 year old Percy Jackson gets kicked out of Yancy Academy, his school, after destroying his teacher, who is actually a Fury.(Furies are Hades’s personal bodyguards, they hunt for souls.) Grover, Percy’s best friend, turns out to be a satyr who, while tracking down Percy on vacation, takes him to camp. Percy’s dad is unkown and has had to put up with his stepdad, Gabe. He finds out he is the son of Poseidon. All of this takes place in the summer of 2005( present-day to when the book was made, 2005).

Percy is the 12 year old demigod son of Poseidon. He has black hair, isn’t atheletic or popular, and is the holder of Anaklusmos(Riptide, in Greek), a sword made of celestial bronze that kills monsters and takes the form of a ballpoint pen. Percy has a good sense of righteousness, but will do anything for his friends. He is similar to an average 12 year old boy. Annabeth joins him, a fellow 12 year old demigod, who is a daughter of Athena. She wields a knife in battle, sports an invisibility cap, has curly blonde hair, and is very smart and clever. She becomes Percy’s friend. Grover is a timid satyr who is 27( satyrs grow half as fast as humans), is Percy’s best friend, hates underground places, and lobes to eat aluminum cans. Luke is a friend of Annabeth’s. He is a 19 year old son of Hermes(god of thieves and travelers) and runs away from home. He feels abandoned and hates his father.

Life at camp gets normal for Percy, he has classes like swordfighting and Ancient Greek. After finding out of his heritage, he is offered a quest. Zeus’s master bolt ( his ultimate weapon) is stolen! Poseidon is to blame and Percy and his friends only have 10 days to get it back before war between Zeus and Poseidon starts. All clues point to Hades, but an evil, more ancient power could be behind it.

There is no real moral for this book. If there is any, it would be to never give up, things will work out in the end. Never doubt yourself, take as many opportunities as you can. Adventure lies right around the corner. And be careful who you make friends with, they may be evil.

This book is phenomenal in my opinion. It’s a weird spin on copmmon fiction. The books take getting used to, as they’re first-person, Percy’s point of view. Everything is so real and engaging. You can see them in your mind’s eye. The story is a good action, comedy, and everything in between mix. It has a good balance of storyline and action, which is rare. The first 50 to 100 pages are slightly bad, but it picks up. For the first out of five books series, it’s memorable, a classic worthy of Oz or The Lord of the Rings. In order to find out more, read the book series. In short, Riordan is a master 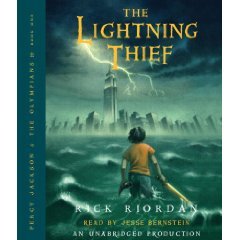 
Buy from Amazon
The author's comments:
This book is a personal favorite. It was an English assignment, so I decided to write about Percy. Please comment, it's appreciated.
Post a comment
Submit your own

ThatDude said...
on Oct. 5 2016 at 3:16 pm
ThatDude,
0 articles 0 photos 3 comments
View profile
This is one of the best books I have ever read and herw are only some of the reasons as to why.First off,there are several plot twists that,at first glance,you would always assume who it was and you would almost always get it wrong.This book also has so many mind twisters,as do all of the books Rick Riordan makes,and one of the first ones makes you wonder "What is going on?",but it will explain what happened eventually. Another reason that I love this book and keep on coming back to ig is because its so interesting,and you will eventually miss one scene or character in it.One day I came home and sat down and my mother gave me this book to read,but I pushed it away and kept on reading what I was currently reading,and one day I asked for the book...I wouldn't put it down,even after it was 4 in the morning.That was a while ago,and now I re-read it every month just to find scenes that I like. (My favorite scene is at the beginning,where Percy beats up an old lady who craves death.) Love your books! Sincerely, That Dude
parislove said...
on Jan. 28 2015 at 3:14 pm
parislove, Salado, Texas
0 articles 0 photos 3 comments

View profile
this is like the BEST sieres
kiki4221 said...
on Dec. 16 2014 at 2:23 pm
I highly recommend Percy Jackson & the Olympians by Rick Riordan. It has everything in it romance, comedy, action, and adventure. The purpose of the book is to entertain people.Accused of stealing Zeus’s lightning bolt, Perseus Jackson thought he was just a normal ADHD child but he soon finds out that he is a half god or a demi-god.  Now he has to deal with the news that his father is Poseidon the god of water. He also has to save the world from total devastation by returning the bolt to Olympus. How does he do that you ask? You have to read the book to find out.There wasn’t really anything wrong with the book. The story and the characters were great. The fight scenes were great too.I suggest anyone who likes action to get this book. There is a little bit of comedy in it too. There is adventure. This book has got almost everything.
sara77365 said...
on Apr. 3 2013 at 8:28 pm
im reding this book right now . thanks for the god book report .(well written] (:
AllenGraw BRONZE said...
on May. 1 2010 at 9:53 am
AllenGraw BRONZE, Hinton, West Virginia
1 article 0 photos 2 comments
View profile
Thanks, you're very...nice.
Macky said...
on Apr. 29 2010 at 9:38 am
The review was very well written!The author for the review made the book sound as if it would be a very fascinating read. I am a fan of the Lord of the Ring series and I grew up watching Wizard of Oz. Because of the Wizard of Oz movie, it resulted in wanting to read the series with no regrets. The Lord of the Ring movie series is an excellent watch for adults and children. I am a fan of horror novels and non-fiction history, but this review definitely has swayed me in wanting to read Percy Jackson and the Olympians. The review was well writtenand easy to understand. The reviewer also made it easy for other readers, who might not be familiar or have some lack of knowledge, by adding the definitions to some of the terms, and explaining what the mythical gods and demi-gods that are. That touch made it nice. The reviewer has excellent skills in the understanding writing and language that a person rarely sees in young writers. With a few more years of polishing and tweaking, this person should seriously think of furthering a career into writing- reviewing books, movies. It would not be an improbability for the reviewer, within the near future, of becoming a new writer of series comparable to the authors of Lord of the Ring, Harry Potter, and the Star Wars series. Great job!
AllenGraw BRONZE said...
on Apr. 28 2010 at 7:06 pm
AllenGraw BRONZE, Hinton, West Virginia
1 article 0 photos 2 comments
View profile
Percy never sang"When a Man Loves a Woman". It would be cool though... Thanks for the support,though! Reviews are always appreciated.
fastlikemountaincat said...
on Apr. 28 2010 at 4:45 pm

Good review- you gave those of us ignorant to this book, author, or series a strong synopsis and hit the high points. Although it probably isn't a book I would read, I enjoyed reading the review. It is a reasonably well written review and makes sense. Not much room for improvement- maybe proofread a little closer next time. You should keep doing this because you seem to be good at it. Maybe even start your own blog or something.

One thing- you didn't mention Percy Jackson singing "When a Man Loves a Woman". hmmph.