When I think of a book that will make me look and think like an intellectual, I think of Freakonomics. This book has taken the title of New York Times bestseller with more that 4 million copies sold around the world. When you combine a witty professor of economics and a writer/editor of a major magazine, the world of Freakonomics is born.

Freakonomics has six of the most informative chapters in a book. The authors, Steven D. Levitt and Stephen J. Dubner, really took the time to gather incredible information and analyze it all to create never before thought of statistics. This book asks questions that many people over-look and makes comparisons that the average person would not or could not think of. Freakonomics looks deep into the world of school teachers, sumo wrestlers, KKK members, real-estate agents, drug dealers, criminals, and parenting. I bet you can’t figure out which of these are compared to each other. The authors also take the time to create different charts and tables to prove their point which makes the information seem credible.

When I first started reading Freakonomics, I wasn’t sure whether to like it or not. I felt as if I were bombarded by statistics without really knowing how it all mattered. As I read on I started to enjoy the book and get a clearer picture of what the authors were trying to get across. Once I learned that the point of the book was to show and explain how unimaginable subjects could be correlated, I was intrigued. I was very surprised to read about things many people never knew about. Perhaps my favorite chapter in the book was “Perfect Parenting, Part 2; OR: Would a Roshanda by Any Other Name Smell as Sweet?” This chapter wasn’t as interesting as the others, but it fascinated me how two people could acquire so much information. It showed different names of different level of income families and their success from 1990 to 2000, ten years! Not many people take that kind of time to show how something as little as a name can make a huge difference in your life.

Although Freakonomics dug deep into subjects that were unthinkable, the book did have some dry parts. Maybe some of these subjects weren’t thought of because they weren’t relatively interesting. The chapter discussing the KKK had no relevance to real-estate agents while I read it, even though there was supposed to be a connection between the two. Constantly reading statistic after statistic did after a while tire me out. As I read into the book more, the subjects got more interesting, but my patience was wearing thin. It became tougher to concentrate on what the book was saying because the authors tried so hard to prove their point that they sometimes flooded the chapter with data. 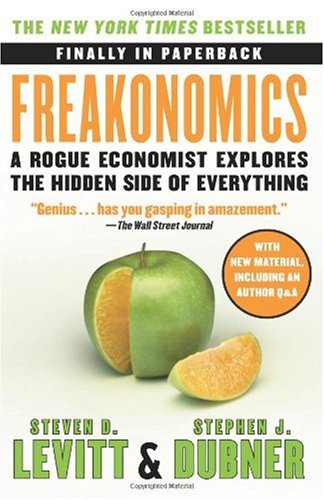