Perusing the biographical section of any bookstore, a person can find memoirs written for the sole purpose of gaining fame or money. Lone Survivor by Marcus Luttrell, a Navy Seal, does not fall into that category. The book is Marcus’ recollection of a mission in Afghanistan of which he was the only survivor of his four man team. After only a few pages, it is evident to the reader the Marcus is not out for personal gain, but to tell of the bravery of his three comrades who didn’t make it back to tell for themselves. As the sole survivor of the ill-fated mission, Marcus makes sure that the world won’t forget about his friends and brothers-in-arms anytime soon. Lone Survivor is a great pick for any reader looking for an emotional, insightful memoir by a true American hero with a story worth telling.


Lone Survivor is not just the story of Operation Redwing. One of the reasons it is such a good read is that Marcus also offers his opinion and insight on the wars in the Middle East and how western media has made it hard for the military to operate without fear of being portrayed as criminals or murderers by the press. He gives his own personal opinion on how the war should be fought based upon his own experiences serving the most elite military unit in the world. In today’s world, where Americans often see only one side of the war through the media, a lot is not understood by those who haven’t been there, but Marcus gives the other side of the war and the negative aspects of the media. His views are a welcome change to what has been spread by the media and the government.

Marcus’ style of writing keeps the book interesting and fresh so that by the end, the reader has read of his life from birth to the present. However, it is not presented in chronological order. The book jumps around to different parts of his life. For example, the Lone Survivor begins with Marcus and his team on a plane to Afghanistan, and then jumps to Marcus’ childhood, then SEAL training and back to the plane over Afghanistan. Throwing in his insights and opinions, the story is woven together seamlessly. The style is very conversational, as if Marcus is just talking to a friend and recounting things as they come to mind, and by the end, the readers really do feel as if they are good friends because of Marcus’ “bear-all” writing in which he doesn’t hide all the details.

Lone Survivor takes readers on an emotional rollercoaster where one page can have them smiling at one of Marcus’ humorous comments or a story about one his friends. But by the next page, readers will have moist eyes as he writes about his fallen comrades and the tough job he has given himself of visiting each and every one of their families and loved ones. The way Marcus writes about his comrades’ last acts and words makes the reader think of his own family and loved ones. It is amazing that a battle hardened Navy SEAL can write with such affection about his fallen brothers.

Lone Survivor is in a league of autobiographies by people who truly have accomplished or experienced something worth writing and reading about. Today, it seems as though anybody who has done something even remotely out of the ordinary will write his or her memoirs in order to make money and gain some fame, but books by former drug dealers or addicts don’t compare to this amazing, inspirational story by an American hero. It is a must read for anyone who wants the side of the War on Terror not shown by corporate media. 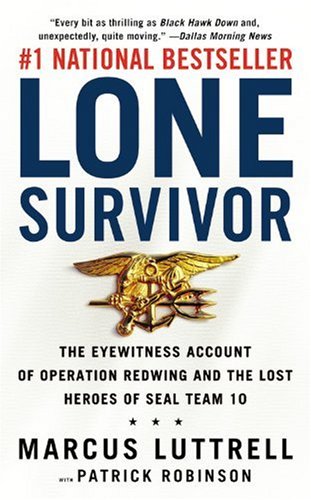