Ireland. The breeder of the world’s most brilliant and artistically intellectual minds, of the most accomplished writers and storytellers the world has ever seen. From the days long forgotten when the poets of the Four Provinces studied for twelve years the Cycles and the myths of old Eire and passing through the days of Moore and Shaw and Yeats and Pearse to the most recent with the great Samuel Beckett and Seamus Heaney, Ireland has become a landmark and a major contributor of the finest literature in existence. And one can hardly believe that such amazing authors and minds have come out of such a tiny sea-beaten weather-struck island.
For the past thirty or so years the history of Irish literature and its worldwide role was revitalized by one major accomplishment: The publication of Frank McCourt’s “Angela’s Ashes” and its winning of the Pulitzer Prize. Such novel became a major success worldwide and this immediately revived the world’s interest for Irish culture and the sufferings of the Irish themselves along the centuries, and also stood as confirmation that there were still writers in Ireland worthy of the title of seanchaí (storyteller in old Irish). But here I will speak of his follow-up novel, entitled “’Tis” which I consider greater and much more accomplished given its central condition: A young man entering the real world and dealing with it.
Written in an amazing prose style (which is as simple and bare as Paul Auster’s but as fast-paced and insane as Jack Kerouac’s) McCourt tells us of his arrival to the big city of New York, the land he has been dreaming of for the past nineteen years of his miserable life in Limerick, Ireland, abandoned by his drunken father as a young boy and left to battle with the perils and the humiliation of poverty. We see throughout the span of this novel the hard accommodation of an Irishman in America, his struggle to survive in a city that cares for no one and that has time for no one, a man who dreams of attending a university like those kids of his age he sees on his way to work either at the Biltmore Hotel or at the docks, who dreams of having the American Life, even though he himself never finished highschool.
It is an incredible tour de force to see and be in presence of McCourt’s fight to become the living personification of a dream he has been dreaming for so long and to see him battle and succumb to the obstacles that arise with the years: The shadow of his father’s drinking problem that haunts him in every corner, his drafting into the army in the midst of the Korean War, his hard balancing of studying and work and finally his marital life and that of a city filled with wild entertainments and false promises of pleasure.
This is not a pleasant read, but it is. It is funny and it is sad: A contradiction that has been clouding in McCourt’s prose since Angela’s Ashes where at one page you could cry at the sheer dearth of a family and at the next one laugh with excitement with the witty dialogues and little Frankie McCourt’s innocence. In ‘Tis you will laugh with equal excitement but you won’t be as sad, no, you will become angry and frustrated at parts as you watch the many mistakes of McCourt, and sometimes you will want to scream at him to get up, get out of that pub and go back to his wife, and a couple pages later you will laugh with him and forgive him.
All in all, McCourt’s novel is one of the finest in the past twenty or so years of Irish literature, and, unlike many authors, he tells the story of his own life with a complete and shocking honesty, he’s not trying to improve his personal image by making himself good and heroic, no, he shows himself as he is, with all his terrible flaws and all his amazing talents. ‘Tis a raw and a liberated confession of life. 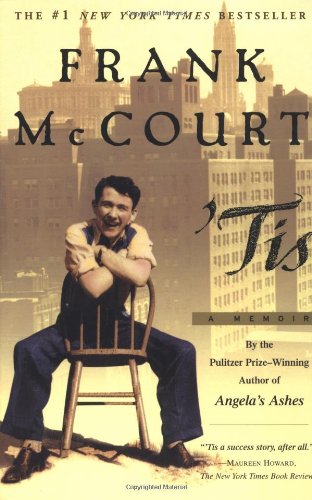 Favorite Quote:
"I am not young enough to know everything"
"These are days we dream about, when sunlight paints us gold, and this apartment could noat be prettier as we danced up there alone."

View profile
I always saw Angel's Ashes around but never picked it up.  Now i think i'll read it and 'Tis too.