Every so often, if we bibliophiles have pleased the gods,we will be rewarded with a truly magnificent story. I must have done somethingexceptional or racked up some grand karma to have earned the gift of NeilGaiman's superb graphic novel series, The Sandman (and the subsequent Deathspin-offs).

The Sandman is one of the best comic series of the ྖs, andfor good reason. The obvious time Gaiman invests in his work and the fascinatingdetails he weaves

into every beautifully drawn frame make these comicswell worth the price.

The Sandman stories follow the daily lives of sevenimmortal beings who are the anthropomorphic manifestations of various staples ofthe universe, dubbed simply The Endless. Before man existed, The Endless had noform, but for the sake of human understanding (and to make Gaiman's artists' jobsa bit easier), they took on carnal forms. Each of The Endless has skin the colorof milk and deep, probing eyes, but that is about all they have in common.

Gaiman further engages his readers by introducing intriguing characters.One is Lucifer himself - a troubled iconoclast perturbed by his destiny and madebitter by his fall from grace. Lucifer, in Gaiman's world, is not so much evil asdisturbed, and this spin makes Seasons of Mists, the fourth of the ten books,even more interesting than I expected. One of the most humorous scenes is whenLucifer is on a beach and admits that sunsets are "bloodymarvelous."

If you're sick of stereotypical characters, or yearn fora comic series with references to fine art and classical literature as well asfluid, poetic prose, then The Sandman series is for you! Throw in superb, highlydetailed illustrations by artist Kelly Jones and - abracadabra - you have one ofthe niftiest comics yet created. 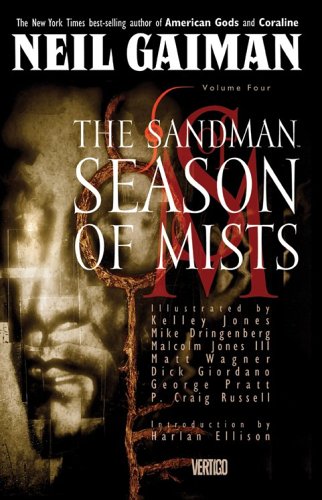