The Face on the Milk Carton by Caroline B. Cooney | Teen Ink

The Face on the Milk Carton by Caroline B. Cooney MAG

Have you ever looked at the back of a milk carton to see who has been reported missing lately? One day at school Janie Johnson looks at her friend's milk carton and is surprised to recognize the little girl on the back; it is her. She has had a few daymares about a woman talking, laughing, or just sitting with her. In each one, she sees herself wearing a polka-dot blue dress. It's the same dress the girl on the carton is wearing! Janie is 15 now, and according to the carton, she was three when she was kidnapped. Wouldn't she remember it?

I loved The Face on the Milk Carton because of all the details, exciting plot, and well-developed characters. Janie and Reeve, who are neighbors, fall in love. Reeve is a few years older, very popular, and not nearly as smart as his brothers and sisters. Janie, a good student, doesn't spend much time with her dad since he gets home late after coaching soccer. Janie takes art class once a week with her mom because her mom thinks they share artistic talent.

Since Janie has a good relationship with her parents, she is very confused. How could these loving people have kidnapped her? Nevertheless, she starts asking questions about her birth certificate and passport.

Caroline Cooney has a special talent for describing details. I like that she wrote how someone complained that Janie's bright red hair got in their face, instead of just telling readers that she has red hair.

Who are Janie's parents? How old is she? Whom should she believe? Who is she really? Find out in The Face on the Milk Carton. I give it five stars. You can find out more about Janie and her search in What Ever Happened to Janie?, The Voice on the Radio, and What Janie Found. 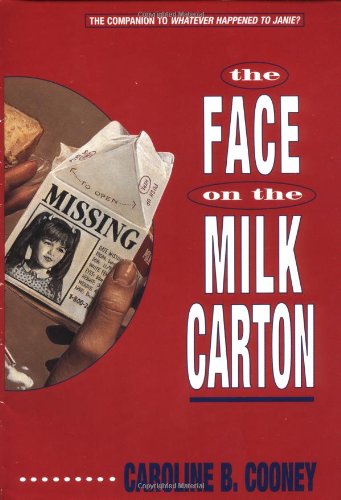 anonoymous said...
on Aug. 18 2011 at 11:25 am
the summary sounded like a great book but in the begining of the book it was really boring . in the middle of the book its real like curious and then back to boring i saw the movie and its horrible
HollyBell BRONZE said...
on Jul. 17 2011 at 6:03 pm
HollyBell BRONZE, Orpington, Kent, Other
3 articles 0 photos 23 comments
View profile
Good review. I haven't read this book but this article has certainly made me take it into consideration. It reminds me of the true recent-ish news story of 'Jaycee Lee', the girl who was kidnapped at the age of 11 (I think) and rather then being murdered or tortured like you would usually expect in kidnappings was welcomed into the kidnappers family like a daughter (although she had two children by the kidnapper) she wasn't found until I think it was 18 years later, and the parents found at that she had access to the internet and everything but still didn't try and find her parents probably because she had become a real part of these kidnappers family. Anyway, great review, simple, short and you seem to have captured a summary and main parts of the action to the story.
TheJust ELITE said...
on Mar. 28 2011 at 8:43 am
TheJust ELITE, Ellenton, Florida
254 articles 202 photos 945 comments

Honestly, I found this book boring. It's one of the only that I actually put down. It wasn't intriguing and I didn't find her writing style all that spectacular.

Nicely written article but I don't agree with you.

View profile
I have read the books the face on the milk carton, the voice on the radio and part of the book what happened to Janie?, and I totally agree with your review and I really enjoyed those books. You did a great job!