a thrilling book on the case of Scott Peterson who allegedly murdered his wife, Laci Peterson, and his unborn son. What were his motives? Was he mentally stable? What are the facts and evidence? There are so many questions and only this book can answer them for you. Catherine Crier is familiar with our criminal justice system. She has served as a prosecutor and judge in the past; she is now a journalist. Not only does this book give you the layout of the crime, it gives you interviews with important people, shows you pictures, and gives you actual reports having to do with this dreadful murder. This is the untold story of the Scott Peterson investigation.

Scott Peterson was born in Fresno, California on October 24th, 1972. His father named Lee Peterson and his mother Jacqueline Latham. Both his parents attended decent paying jobs. Peterson worked as a waiter in San Luis Obispo, while attending Cal Poly. This is where he had met Laci, his soon to be wife. They both married in August 1997. To the outside world, Scott and Laci seemed like the average American couple. But were they really?
On December 24th, 2002, Laci Peterson was reported missing from her home in Modesto, California. This occurred shortly after their marriage, only 5 years ago. At this time Laci was 8 months pregnant with their son. This gained nationwide interest and police did everything they could to unravel what has happened. With no sign of evidence, they eventually started to question Peterson. Due to inconsistencies in his stories and several affairs with therapist Amber Frey, this rose suspicion of Peterson. Frey was told by Peterson that he had “lost” his wife. He told her this fifteen days before Laci's disappearance. This shows intent on Peterson killing his wife. Once Frey had realized that Peterson was a liar, she reported to the police. The police could not convict Peterson of murder until they had more evidence.

Time went on and the search for Laci Peterson continued. On April 14th, a male fetus was washed ashore on the San Francisco Bay. Ironically enough, this was where Peterson had been boating on the day of Laci's disappearance. The next day a female body was also washed upon the same shore. It was just the torso. Autopsies reported that this was Laci Peterson's lifeless body. Though the cause of her death could not be determined, investigators theorized that she was either strangled or suffocated. Forensic evidence revealed a single strand of Laci's hair stuck in a pair of pliers that had been left in Peterson's boat.

The world believed that this was enough evidence, and so did the authorities. At that, Peterson was arrested on April 18th, 2003. Upon arrest, it was noted that Peterson had a bunch of various items on him as if he was about to go somewhere. Items such as credit cards of different family members, his brothers drivers license, camping tools, a tent, a shovel, and MapQuest directions to Amber Frey's office. Aside from this peculiar items, he had also dyed his hair and facial hair blonde.

The trail for Peterson was set to take place June, 2004. Upon Peterson's arraignment, he stated that he could not afford a private attorney, so public defender Tim Bazar was assigned to Peterson. And so the trial took place with Rick Distaso being the lead prosecutor. Amber Frey was placed as a prosecution witness. Since all the evidence was directed towards Peterson, the defense team based their arguments on the fact that there isn't enough direct evidence to accuse Peterson as a murder. They theorized that someone else had kidnapped Laci and dumped her into the ocean. Of course, the court didn't buy their lies and false stories, so Peterson was finally declared guilty. Guilty of first degree murder of his wife Laci Peterson, and guilty of second degree murder of his unborn son. On March 16th, 2005, Peterson was formally sentenced to the death penalty.

Scott Peterson's motives on the murder of his wife are all opinionated. No one will know for sure what Peterson's true intentions were, but we all can say that he did intend on killing her. In my own opinion, I believe that his two main motives were Amber Frey and money. It is known that Peterson had been in debt and it was increasing. With a baby on the way, he knew that he would be putting a lot of money towards him. Aside from money, we all well know that Peterson was in contact with Amber Frey and has had affairs with her. MapQuest directions to Frey's office were found on him upon his arrest. Relationship and money problems give you no reason what so ever to murder your son and wife. Was it just because he was crazy, or just because he didn't think before he took action? This is all speculation and opinion, only Scott Peterson will know the truth behind his motives.

In conclusion, this case all in all has taken a huge impact on the criminal justice system. It has opened the public's eyes to what has and what might happen. More specifically, authorities most likely take a lot more action on searching for missing entities. No one can escape the law, not even cases that seem so farfetched. From forensic studies to electronics, there are so many ways to crackdown on various cases. Scott Peterson, an alleged killer, was put on trial for the murder of his wife, Laci Peterson, and his 8 month old unborn son. He was declared guilty of first and second degree murder. With a formal sentence, he received the death penalty. Scott Peterson resides in San Quentin State Prison, where he still is today. This is the untold story of the Scott Peterson investigation. 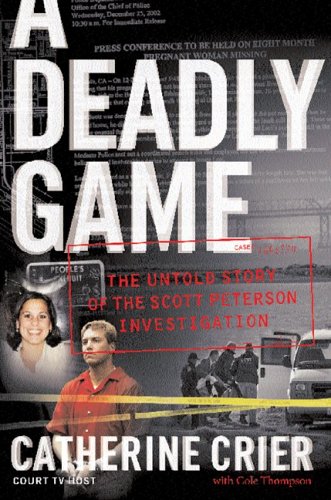 
Buy from Amazon
The author's comments:
A Deadly Game is a book written by Cathrine Crier. This is basically a summarization and reflection on what I have read.
Post a comment
Submit your own

The title of the book is supposed to be at the beginning of this article. It must have not copied correctly.