The most important community a child has, family is supposed to be a forgiving, supportive group. But what if that group is absent or unwilling to love? Adeline Yen Mah's autobiography, Falling Leaves: The True Story of an Unwanted Chinese Daughter, is a devastating tale about her childhood competition for love.

Adeline is an unlucky child. Her father's cherished wife dies giving birth to her, branding her life a hard one from the start. Her father's grief causes him to ignore her and instead focus his attention on the beautiful Niang, whom he later marries, cementing Adeline's unhappy future.

Her siblings also express their parents' disfavor toward Adeline, adopting the same demeanor and going so far as to pull mean, disgusting pranks on her. They are forced to compete against each other for their parents' acceptance and Adeline, the smallest and already out of favor, is an easy target for her siblings. Niang does not stop them and instead watches in silent amusement as her least favorite stepdaughter is tortured, if not physically then mentally.

The only love Adeline experiences during her childhood is from her aunt, who saves all of Adeline's grades, bringing them out whenever she feels no hope for the future. Her aunt is the only family who offers shelter and support, daily reminding Adeline that her academic achievements will earn her her freedom. True to her aunt's word, Adeline attends college in England and moves to America to become a physician.

Although physically free from her stepmother, Adeline is far from over the psychological abuse she suffers. Her father's death and Niang's claim to his fortune push Adeline to further seek acceptance. Since she has never heard it from her father, Adeline wants to hear her stepmother say that she loves her, that she is proud of all that Adeline has accomplished.

While Niang is dying, she makes a special request of Adeline - she wants to die in Adeline's home in America, intimating that Niang has finally accepted her. But when her stepmother dies, she leaves Adeline completely out of her will and splits the money between her other stepchildren.

Surprisingly, the story ends on a happy note. While going through her father's room she finds his will, which Niang had hidden. It reveals that his fortune was to be equally divided between all his children, including Adeline. This knowledge overwhelms Adeline as she finally feels like she belongs.

This book left me completely raw. The emotions sparked by Mah's simple words are powerful and I felt like I was a bystander, powerless against the neverending disapproval. Like Adeline's aunt, I wanted to protect Adeline from her family's unjust hatred. Mah's story reminds us of humanity's never-ending quest for acceptance.

I think Mah wanted her biography to be less of a feel-sorry-for-me story and more about following your dreams. I believe she was able to defeat her feelings of worthlessness by using writing as an outlet for her feelings. Through her experiences, others can learn that while family acceptance is important, the most important thing in life is to approve of oneself and others will do the same.. 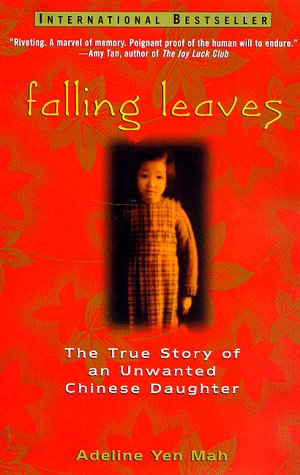 Favorite Quote:
"The autumn leaves are a riot of color. They remind us of the good, colorful things, and their crunch beneath our shoes also bids adieu to all bad things that have long gone,"

View profile
You must try 'Chinese Cinderella', by the same author. I have read 'Chinese Cinderella', and believe me, that book didn't leave my bedside table for a week!!!! I love the way you've written the review. Great Job! Hey, can you check out my work as well.
rheame said...
on Jul. 15 2013 at 10:54 am
rheame, Anand, Other
0 articles 0 photos 64 comments