There are many exciting conflicts in the book Uglies by Scott Westerfeld. The first conflict is when Tally Youngblood sneaks over into New Pretty Town to see her best friend Peris. But because she is an Ugly she is not allowed in New Pretty Town. In this book everyone is considered an Ugly until there sixteenth birthday when they get the Pretty operation. When you think of ugly now it’s allot different then, in the Pretty Time anyone normal is considered Ugly. So anyway, Tally ended up not only crossing the river that borders Uglyville and New Pretty Town, but she went out into the center of town, and crashed a party, of course in disguise (sure the disguise was a pig mask but it was better to be caught in that then her normal "ugly" face. She obviously didn't plan this well because she ended up in a situation that little did she know changed her life forever. She was in an elevator in Garbo Mansion and couldn't get it to work; she realized it was because she didn't have her interface ring, without she was basically a nobody Peris found her in the elevator and made sure she escaped unnoticed. She promised Peris that she wouldn't get caught. The only way she could escape, was bungee jacketing off the mansion. She did so setting off the fire alarm. After escaping, she met Shay. Shay ended up being her best friend, and they shared the same birthday. This meant they would both get the Pretty operation on the same day! That is, until Shay decided to run away to the Smoke (a place where no one got the operation, some Uglies ran away to here). Shay wants Tally to come to, Tally wanted to get the operation and become pretty, so she decided to stay behind. Everything was all set for Tally Youngblood to get the operation, until she was brought to Special Circumstances. There she met Dr. Cable the leader of SC. She left Tally with the worst decision to make: Find Shay and turn her in, or never become a Pretty. The choice she makes changes her life forever. 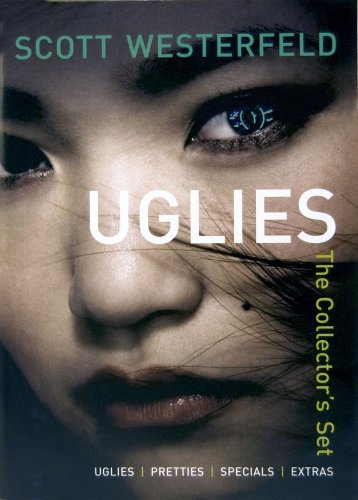 
Buy from Amazon
The author's comments:
This was originally a language project
Post a comment
Submit your own

Favorite Quote:
love me love me say that cha love me fool me fool me oh how ya do meh kiss me kiss me say that ya miss me tell me what i wanna hear!:ll <---repeat!! lols ~justin bieber~

View profile
uh! i read this book/9whole sries 2!!) FELL IN LOVE WITH THEM1!!! read them in 2 weeks last year