Under the Blood Red Sun

Under the Blood Red Sun
By Graham Salisbury


I have never known and felt the innermost emotions of being in a war. But in Under the Blood Red Sun I was experiencing the extreme extent of World War II, Japan vs. America. Graham Salisbury really helped me understand the main points and themes of being in World War II. War, distrust, innocence, love, faith, and survival. I was taking every step that the main characters took. I was involved in this historical happening.

This story is about a young boy named Tomikazu Nakaji that lives with his family, Mama, Papa, Grampa, and little sister Kimi. This historical fiction read takes place in Hawaii in 1941. Tomi's family is Japanese while he is American. His family sticks to Japanese traditions like worshipping the Emperor of Japan and keeping their sacred “katana” safe. The “katana” is a samurai sword that needs to be taken care of and to remain undamaged. Tomi is just a regular American boy that plays baseball with his best friend Billy and his team “The Rats.”

People do not like it when others show that they believe in Japanese theories because of the war that was going on between China and Japan. Citizens of America thought that Japan was going to attack America, next. Soldiers were on every inch of the border of Hawaii, guarding and waiting. You will be amazed of how easy you can visualize the setting. It was like I was living in Hawaii while comprehending this page-turner.
Tomi's grampa one morning put the Japanese flag up that waved in the swift breeze. He wanted everyone to know that he was Japanese in his heart. But when Keet Wilson, a young bully, came around the corner, he blabbered to his father about how Tomi had a Japanese flag hanging in the front of his house. Grampa played a major roll in this book because he showed that he believed in Japanese traditions. But then something occurred that would affect Tomi's family forever.

One day, Billy and Tomi were playing baseball and suddenly Pearl Harbor was being bombed by the Japanese! Planes were flying everywhere with antiaircraft guns blowing up beaches, houses, and buildings. I felt like I was in the moment and I think you will to, because the author described how Tomi was discovering that his family could be in great danger.

Tomi's grampa waved the Japanese flag as the planes flew over his house.

Tomi's grampa did not think the Japanese were going to bomb Pearl Harbor. But to his complete surprise, they did.

Tomi's school was closed and Grampa's good friend Charlie came to their house to tell them the news about what was happening. Tomi's papa was gone, out fishing with his friends. Charlie explained that if fishing boats did not have an American flag with them, that they would be shot or put into prison.

American soldiers roamed around Pearl Harbor after the bombings had come to an end. Tomi was so furious and worried that his papa was going to be killed. He was devastated when Charlie came out with the truth. His father was shot in the leg and put into custody. Papa wasn't warned that an American flag needed to be on their fishing boat. At this part of the story I was shocked and scared. I wondered how it would feel if that happened to me. The author went deep into the conflict and made me feel like I was in the days when Tomi was frightened because of such the considerate and thoughtful knowledge that Graham Salisbury had presented.

Graham Salisbury used vivid language that will drag you into the journey of Tomi's experience. Tomi was such a valiant and courageous boy in this book. Will Tomi ever see his father again? Is his family in danger? This war made a major mark in history and many people were injured and killed. I am so glad today that we still have dedicated soldiers to fight for America's freedom.

If you enjoy historical fiction and action then go to your local library or at home, pick up this novel and enjoy the adventure that Tomi Nakaji undergoes being in World War II. 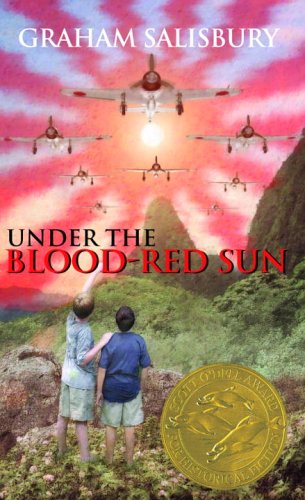