The Young Man and The Sea | Teen Ink

The Young Man and The Sea

“The Young Man and The Sea” is a book by Rodman Philbrick. He is a really interesting book writer. This book is one of the many books he wrote. The book is about a young twelve year old boy by the name of Skiff Beamen. Skiff is a lonely boy in his own world. Nobody seems to understand where he comes from. Ever since Skiff's mom died in an unknown accident, his dad never took part in his life. Skiff does, without anybody else's' help, his own thing.

Skiff's father has a boat that when Skiff's mom died, he never touched. Skiff loved that boat because it symbolized something to him. It was something special. It was something that he had for himself and something that he could care for. One cold, windy day the boat that Skiff cared so much about sank. Because his dad wouldn't help take it out of the ocean, he went to the neighbor. The neighbor told him since the boat is under water, the engine would be no good. Skiff didn't give up then, though. He wanted that boat out. He wanted to show his dad that he could do something without any help. Skiff doesn't have enough money to buy a new engine; on his own at least. He goes to his neighbor again, but his neighbor already has a lot on his hands anyway. Skiff doesn't think he can do it because he's a helpless little boy that doesn't have a job and can't get the money. He knows that the engine will cost him thousands of dollars. He won't give up, thought. He knows there's some way to fix it. Now he's thinking if he could possibly manage to catch a huge fish to try and save the boat.

In my opinion this book could be a little more mysterious. I love mystery books and adventure books, but this book didn't really catch my attention as much. I would actually only recommend this book to kids at the age of ten. This book was interesting and in only some parts caught your attention and made you wonder. It's very understanding and not confusing at all. In my opinion, it was a really good book, but not the best book I've read in my life.

“The Young Man and The Sea” was a pretty wonderful book. The whole time I was reading it, I couldn't wait to see what would happen next. It was exciting and adventurous. It kind of made you feel like you were Skiff. When you feel that way, you know it's a good book. 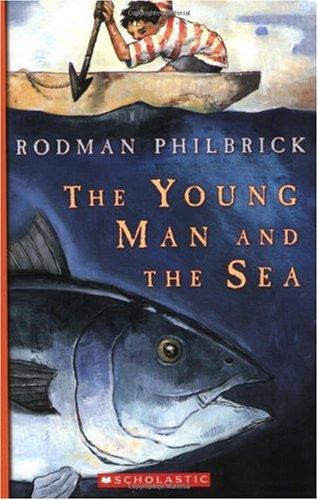 
Buy from Amazon
The author's comments:
This book was pretty amazing. Not the best book ever, but it was close to it.
Post a comment
Submit your own