I once found a caterpillar
Named it Phinneas
Fed it some broccoli,
Got bored,
And stamped on it.
This was how I discovered
how to be a murderer

The world was once
the playground up the road,
the beach down the road,
and my house somewhere in between.

I had to walk in the white pedestrian line,
I had to hold on to a hand because if I took one step past
The playground fence, God knows what I would discover.

Maybe the hand that held my little fingers
Was worried that I would know of
the cars careening,
Automated to hit little children.
That I would see the old woman scavenging for
Garbage on the street,
that every dog which barked
Would deafen my little ears.
That the five o’clock news broadcast
would make me realise the world was uglier
then what Louis Armstrong sang about from
my cassette player every night.
Little did they know, that I had already
killed a caterpillar.

My mom was late for work once
and abandoned me at the school gate
I couldn’t walk to class by myself,
I cried for half an hour after the bell rang
Until I realised that the barren maples trees
were not reaching down their tendrils
to kidnap me after all.

When I watched the nutcracker for the first time
And saw that giant rats danced among ballerinas
I had to hide my eyes. My parents told me that
They were only costumes, and I didn’t understand
Why they didn’t just dress up like princesses.

I guess that is what growing up is,
Seeing the rats in the play
Walking alone, and discovering
That when I step off the white line
A car is not going to hit me.

My fish is floating at the top of the tank,
is not a red fish, or a blue fish
it’s a dead fish.
And when a fish dies it’s not such a sad thing
Because when I buried it in the garden,
My parents told me it will help the trees grow.
A caterpillar will eat the leaves
And turn into a butterfly.

This made me smile,
Because I discovered how to apologise
for murdering Phinneas the caterpillar. 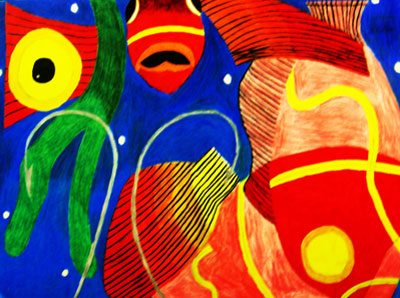 aladine_98 SILVER said...
on Feb. 19 2013 at 9:05 pm
aladine_98 SILVER, Hemet, California
8 articles 0 photos 69 comments
View profile
I found it amazing how you could create the voice of a child to tell the story. Your poem reminded me of Sandra Cisneros' style of writing. It was fantastic! And when I read "My fish is floating at the top of the tank..... it's a dead fish." I couldn't help it: I laughed. An intruiging and simple piece. Great job.
hudsonbytheday PLATINUM said...
on Feb. 19 2013 at 8:09 pm
hudsonbytheday PLATINUM, Toronto, Other
23 articles 0 photos 6 comments

View profile
Thanks! It was supposed to be part of a group spoken word peice but I thought I'd try with just my section.
Anansesem BRONZE said...
on Feb. 19 2013 at 7:58 pm
Anansesem BRONZE, Cave Spring, Georgia
1 article 0 photos 40 comments

Favorite Quote:
"Will our life not be a tunnel between two vague clarities? Or will it not be a clarity between two dark triangles?" ~Pablo Neruda

View profile
This is such heart-achingly honest and clear look at a child's sense of the world. In love and in tears simultaneously.
Jessie_Kat said...
on Feb. 19 2013 at 4:22 pm
Wow.. lovely :)