Favorite Quote:
reality is a perception of what we see in the minds eye,
therefore everyhting is reality,
and therefore every thing is possibility,
possibility that can be fulfilled.

My eyes were focused on the fog in the distance and the forlorn form that caressed each undulating wave of ghostly forms that rippled the surface,

The hills they too drew my eyes forth from a mere glance from the periphery of my vision, and ripped my attention from my soul,

There was a wind that whistled of returns and longings that the populace of dew entombed grass blades echoed with the wind gently swaying,

Trees they cried to me of what they have seen that none should ever bear witness too, and they spoke of blood flowing as if water had been there,

Those trees were so lonely, so barren lacking leaves that all fell to the ground in a permanent Fall they would never recover from,

The grass blades they too spoke to me, they told me of feeling helpless, what it meant to be smaller than everything around you,

What it meant to struggle to survive to beg for Time and Fate to throw a little luck their way and help them to survive one day to continue struggling,

And but for the Fog that spoke in a mighty voice that spoke of order, tranquility, and the Ruin one calls down upon oneself,

The fog had told of power that it changes a balance in Being, in very Existence, to lose the mind and the self in its attaining and use,

The fog told me crying that if it had a choice it would rid itself of the things burdened within it, the loss of power was the gift of living,

Throughout all of this I understood yet I remained numb, hazed, and almost soulless, I lost control of myself and walked past all that I had seen,

Up the hill past the tortured souls of Nature over to the unseen for the moment edge of the mountain, which was once a small hill,

At the top my bare feet crunched pure white snow with the likeness of shattering glass thoughts sent astray when released from their cocoons,

Craning my head the sky pulled my head up a magnet, and the twin orbs of my soul gleamed a brighter green against the charcoal Heaven’s,

Stars of such beauty and magnitude; unadultered by the ways of people that destroy everything, hung in the sky by invisible black strings,

Upon every star there hung a dream tied delicately by silver prayers floating by, but then I noticed in a moment that the stars trembled,

A scream, a cry, echoed throughout the mountains and the next moment the entire world seemed to fall along with the yellow and red stars to the ground,

Trailing behind them in an infinite moment the streaming silver ribbons, evaporating in mid-flight, and slowly waning, then disappearing.

My eyes followed them as they gently kissed the moon goodbye with tear tinted lips, and vomited soft encouragements to themselves as they fell,

I followed their path down to the very last explosion and was surprised at what I saw, forth from the start that had crashed and exploded upon impact,

People crawled out crying in pain and suffering, and together they all made their way to the middle of the flat valley they had landed upon and sat by a cross,

Together they sang holding hands and sang songs of God and His Glory, whilst all around them the land and they burst into flames all together screaming the lines Hallelujah!

I was lost I wanted to be their in a crowd of repentant sinners, but there was not much I could do for I knew I didn’t belong in there.

I was not one to repent for I could never have repented to begin with, for who in all honesty has heard of the devil to repent? 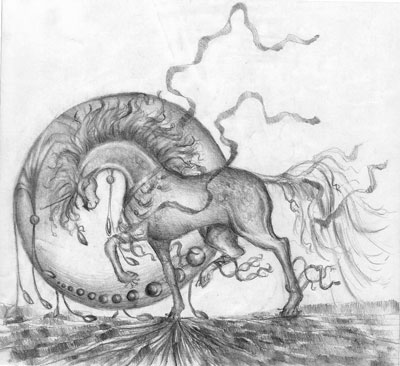