The Boy, The Man, and The Father | Teen Ink

The Boy, The Man, and The Father

Favorite Quote:
"The most beautiful thing we can experience is the mysterious. It is the source of all true art and all science."

Once upon a meadow where the sun sparkle rainbow hues...
A boy, a man, and a father lived with nothing else to lose.
The boy was full of wonder.
The man was full of dreams.
The father sat upon his bench wondering where else he could’ve been.

The boy explored the forest until his legs gave up.
He stumbled back tired.
He made it to his house.
The faded blue in greyish hues reflecting all across.
The dew sparkling down the grass in all it’s utter beauty.
The boy grew up that day as he looked into the sky.
Stars shining, shimmering, glimmering, across and through the night.

The man looked into the darkness and he found his way in life. Beyond the forest lay a village shining in midday.
A beacon of a place that was laid beyond.
The man travelled to the place where he would want to belong. He met a girl and found a place to settle down.
His love, his life, and his wife had all came around.

The father looked back into the dark forest in the night.
The grey-blue house was far from his mind.
He looked beside his bedside and found his wife had gone away. She ran to other places and left him here to stay.
His child was here.
His wife was gone.
His eyes were swelled red and wet.
He travelled back to the place where he first began.
He set his child beside him and fed him all he could.
After five years the father died and a boy was left alone.

Once upon a meadow where the sun sparkle rainbow hues...
A boy, a man, and a father lived by the forest clearing.
The boy was full of wonder.
The man was full of dreams.
The father sat upon the bench wondering where else he could’ve been. 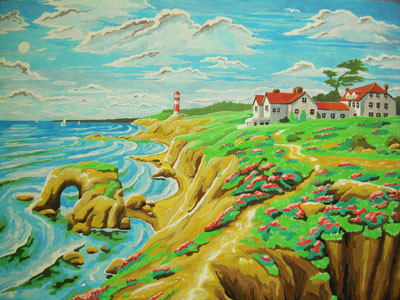 I thought the language and simplicity of this poem/ballad was nice and it had a good repetitive ending that brought understanding and meaning at the end of it.

Favorite Quote:
"The most beautiful thing we can experience is the mysterious. It is the source of all true art and all science."

View profile
Thanks @Queen_Luna!
You might also like a poem I wrote called 'Empty'.
It's not posted yet but it's pending and coming out on my work at any time.
I would also appreciate any feedback you (or anyone), positive and negative, that you can give me to improve my writing.
Thanks!
Queen_Luna SILVER said...
on Sep. 15 2018 at 11:09 pm
Queen_Luna SILVER, Carbondale, Illinois
9 articles 0 photos 6 comments

View profile
I absolutely love this!