Those Who Destroy Pastimes | Teen Ink

Those Who Destroy Pastimes

Now much to my surprise Virgil has taken a break.
What does he have in store for me during his time away?
A specialist to reveal what happens when man ruins more than himself with
a mistake.

I see him approach, and believe that I know him from sports,
not as one would know his own family or friends
but as a legend, a superstar and sadly from his medical reports.

He played for the Yankees, they retired his number 4,
his star was shining so brightly when he was taken from Earth.
A spring in his step down in Hell, what could he have in store?

“Lou Gehrig” he says as he sticks out his hand.
He looks younger and more vibrant than those old photos show.
Not a bad bone within him, he is the guide for this land.

A good guy who is willing to take time from his days high above
to show me the heroes who’ve fallen so far.
Today, a player of Lou’s kind is almost unheard of.

Lou speaks, ”A land for the doomed, doomed and horribly grotesque
foul smells of stale air will take flight all around the entrance.
No worries about deceiving, you can’t cheat on this test”.

Lou presses me down steps as my legs lose their feel.
The clanging of metal stadium stairs, I must follow to a land with no light
figuring whoever is down here, must have plenty of souls to heal.

Again, Lou stops me and asks for my ear -
the walls narrowing slightly as if entering the mouth of a beast.
He whispers quite softly, “Didn’t Virgil tell you? There’s no healing here!”

Expecting a monster, I crept forth with care.
Alone stood a shadow who followed us with a hand.
Though I didn’t know its name, it wore a number and stared.

Now, not a woman nor beast, it’s a “he” guarding this world -
a seemingly unbearable task trying to keep the frauds in.
But a job someone must do, so this “Alzado” was unfurled.

I learned the “Alzado” was honest, the first of his kind.
He confessed, and hoped there would be no more.
Instead, his message about steroids these athletes left behind.

Athletes ruining their sport with substances sometimes hard to detect,
not realizing that what they were doing destroys the fun of the game.
Losing teammates trust and their fans’ respect.

Blinded by dollar signs, championships and records they set,
these fallen heroes thought their fans would continue to cheer.
What they failed to realize was an asterisk was all they would get.

And that’s when I see them, uniforms and all.
Ghosts huddled all around as if giving each other warmth.
All those who used needles to better handle a ball.

Around us were glass mirrors lining the walls.
Their reflections to remind them of the damage they have done.
For they have tarnished the images of fame’s once hallowed halls.

Needles litter the lockers around where these sinners all grouped.
They began to hide their faces, and weep, as if they’d done it before.

Was it their sport, their fans or themselves they had duped?

The “Alzado” explained that it wasn’t just that the shame was too much,
side effects of their demon showed an unusual side -
apparent yellowed skin and a more feminine touch.

Yes, these abused substances turn a powerhouse into a “sis”.
While they live here as men, they are not quite the same
their breasts are large, their male parts small something is clearly amiss.

Now they spend all their days staring at what they’ve become,
with the memories so real of what they had and lost.
It’s obvious to them that they clearly haven’t won.

I was sorry to see the once stars, please have no doubt,
but, they deserve their fate, I pitied them not at all!
It is for the fan I grieve deeply, Virgil you would be so proud! 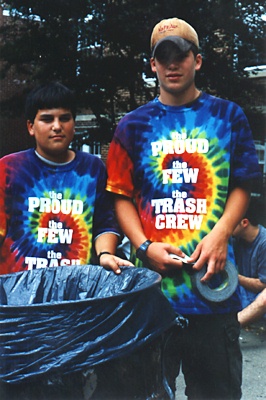 The author's comments:
The assignment: Dante's Inferno was written as a reflection of the times, create a modern day circle of hell. As a sports-lover, steroid use in professional sports was my immediate choice. It has tarnished much of the image of the professional athlete, and raised issues of cheating, personal safety, individual records and fan loyalty - as well as the mixed message it sends to young athletes.
Post a comment
Submit your own