The bells toll, the day has come.
The caress of snowy fingers fumble with the bride's gown as she steps into the church.
Her train is as white and long as the winter outside.
Her flowers are blood red and her veil covers her emrald eyes.
Eyes follow her, eager, sorrowful, envious.
A silent pair of eyes watch with disgust.
She reaches the end of the isle, standing next to her lover.
She places one hand on her slightly rounded stomach and smiles.
O, see how she smiles now!
But will it last?
The vengeful and tired eyes watch.
The pastor begins.
Soon it is over, the "I do"s are said.
The eyes are still watching, tightly gripping whats in his hand...
A shot rings out.
The screams die down.
The silence is deafening.
Crimson floods the marble floor, red as the roses she clutches in her death grip.
O, what jealiousy does to a man!
The agonizing screams seem silent compared to the stillness of her heartbeat.
The murderer's eyes fall to the bloodstained floor.
The groom falls beside his dearest and wails in vain.
She is gone, and her pressious cargo.
The eyes, the dreaded eyes!
The murderer takes his own life, a life for a life, with the gun he used to begin the trade.
But, it is unfair!
Still one more life was taken, that of the woman's babe!
The sirens' wail dies into the misty midnight, just like the souls that brought them there. 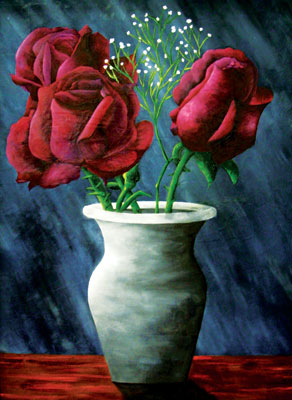 The author's comments:
~Dulce
(A shotgun wedding is a wedding where the groom marries the bride because he had gotten her pregnant.)
Post a comment
Submit your own

Favorite Quote:
"Wow...I epic failed that one didn't I?"