Color Guard is a Sport

Favorite Quote:
"Friendship isn't always easy, but there's no doubt it's worth fighting for."

11 hours each day in the August sun for five days straight, out on the field, learning drill (similar to football plays, perhaps?), learning work, and putting two and two together, all while staying in synchronized step, with a smile. This is what band camp is like for any member of my school’s color guard, and the color guards at most schools. For the guard at my school, rehearsals for the September school year started in July and were twice weekly leading up to band camp. We put in just as much effort as any athlete...so why do most people think that color guard is not a sport?

A sport is “an activity involving physical exertion and skill in which an individual or team competes against another or others for entertainment,” according to Oxford. By that definition, is color guard a sport? Let’s break it down, starting with physical exertion and skill. Many people say that color guard is “easy;” all you’re doing is twirling a flag, right? Well, no, and even if we were, doing it with a weighted flag for several minutes while running around the field in step with everyone else, in time with the music, getting to the right place, and not hitting anyone else is incredibly difficult. However, along with doing drop spins, our work includes pull hits, swings, dancing, weapon work, and several kinds of tosses, to name a few things. Completing all of these successfully, especially tosses which you have to catch at the same time as the rest of the guard, and being able to do it for 5 to 7 minutes straight, requires timing, skill, strength, stamina, and cooperation, if you don’t want to get hit with a flag.

Next, the “team or individual competes” part. We are undoubtedly a team, and we have to be to avoid concussions from other member’s flags. If you’ve only ever seen a guard perform as part of a half-time show, you may not know that marching bands also compete in competitions. While color guard and band perform at the same time and get judged for their overall performance, the color guard also gets a separate score just judging them. All the bands and guards get judged, and yes, there are trophies. We may not be on the field at the same time as our competition, but we undoubtedly compete.

Finally, to be a sport, it has to be for the purpose of entertaining people. That is exactly what the color guard does. We have to half-time show to pump our school’s football team and entertain the crowd, with complex work and difficult drill that when viewed from above actually make shapes. It is a beautiful, incredible sight if executed correctly, and is surely pleasing for the crowd.

One essay I found stated that cheerleading should not be considered a sport because sports do not need to be “aesthetically pleasing.” By this standard, color guard would not be a sport. If you consider this standard, however, then gymnastics could not be considered a sport, which is obviously is, at least to the International Olympic Committee. If aesthetics aren’t an issue, then why is synchronized swimming an Olympic sport, as well as diving and figure skating? Aesthetics shouldn’t play a role in if something is considered a sport or not, and certainly should not prevent color guard (and competitive cheerleading) from being considered sports.

People will constantly come up with new arguments that color guard isn’t a sport, such as it isn’t painful (Ever been hit in the face with a metal rod? Not fun.), we have set work (Football players have plays like we have drill, but that’s still a sport), and in a sport you either get first or last and nothing in between (What about track and field? Or any tournament of any sport?), and every single argument have a rebuttal, due to the fact that color guard is a sport, and should be considered one. If I’ve not convinced you of that, and you believe it is “easy” and “not a sport,” I’m fine with that, but I recommend not telling your opinion to anyone in a color guard, or you will find out what it feels like to be hit in the face with a six-foot steel rod. 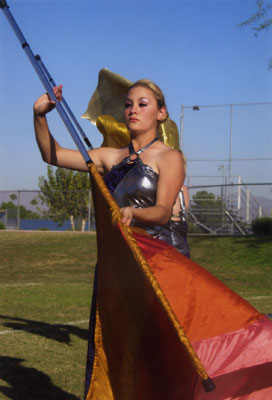 The author's comments:
Please also check out the awesome article "Cheerleading is a Sport" by Renee R., which is another great sport article.
Post a comment
Submit your own

SBCg070420 said...
on May. 9 2019 at 5:04 pm
SBCg070420, Olive Branch, Mississippi
0 articles 0 photos 1 comment
View profile
I loved this!! I was testing all morning and so I wasn’t in half of my classes and the class that I went I later than normal cause I was testing was having a full on debate on weather or not guard is a sport. I personally think that it is. It requires skill, effort, and really hard to grasp techniques. Guard is considered a sport because it requires physical exertion and we compete for titles like other sports do . If dance is considered a sport the Color Guard should be too!
guard-girl GOLD said...
on Mar. 5 2018 at 7:41 pm
guard-girl GOLD, Clover, South Carolina
10 articles 11 photos 147 comments