Nowadays, popular media is where people from all over the world recognize themselves and other cultures. We grow up watching tv and sitcoms, finding our favorite character and who we relate to. However, when it comes to minorities, like non-binary people, this is hard to do, because modern media is not created with them in mind.

One definition of non-binary is “a gender identity is just one term used to describe individuals who may experience a gender identity that is neither exclusively woman or man or is in between or beyond both genders.” Non-binary people have existed for a long time amongst various cultures such as the Māhū in Hawaiian culture and Hijras of India,  with only recently having gained a common name amongst all cultures. Yet representation lacks. Why is this?

The answer is, well, gender roles. In our current society, gender roles are assigned at birth, from gender reveal parties consisting of the colors baby blue and pink, to the side of the zippers on jackets. Everything and everyone is gendered, and this is the way modern society has been working for a while now. That is the reason a lot of non-binary people have been forced to conform to androgyny, because when someone who is gender nonconforming leans on the masculine or feminine side, their identity is invalidated, and they are put into a box they do not belong to. This standard of society has caused non-binary representation to be forced and restrained.

An example of non-strained representation affected by gendered standards is “Wall-E.” It is a movie about a trash-cleaning robot in the future, who falls in love with a foreign robot on barren and abandoned Earth. The main characters are machines, and the message of the movie has nothing to do with the genders of said characters, yet the audience’s first reaction is to assign them genders based on miniscule characteristics such as sound effects and names. Cis (someone who identifies as their birth sex) audiences love clinging to these small characteristics and bending over backwards to fit them into boxes, because without boxes, the very base of today’s modern society, gender roles, might crumble.
Despite ‘Wall-E’ being non-strained representation, it still falls under another trope followed by movies and tv, the ‘Non-human non-binary.’ This trope is commonly found in almost every piece of media about non-binary people. It includes gender nonconforming characters being aliens, shapeshifters, magical beings etc., for example Janet from the “Good Place” (artificial intelligence), Double Trouble from “She-ra” (alien shapeshifter) and The Crystal Gems from “Steven Universe” (magical beings). The ‘Non-human Non-binary’ is by far one of the most dehumanizing stereotypes about transgender people in general, and while it might sound interesting to cis audiences, it is done because of poor writing skills and dismissal of the existence of real non-binary people.
When all the representation that exists of non-binary people is non-human, young transgender children also have a tough time relating and finding themselves in media that they consume. This causes isolation from others who can find this relatability and it takes longer for them to discover themselves and be open to other options and exploring their gender identity and expression.
This trope also effects how society itself views non-binary and gender nonconforming people as sci-fi creatures living magical lives and switching bodies whenever they can instead of actual humans who are just trying to get by their day.
Another popular image of non-binary people is young teenagers with short, dyed hair, usually someone who is assigned female at birth and presents masculine. This is the second cliché used a lot by cis writers and written usually for representation’s sake or for cis audiences.
The only good examples of good representation of the diversity in gender presentation for the community are “Good Omens” and “One Day at a Time.” “Good Omens” has two main characters, Crowley and Aziraphale, both of them being gender nonconforming, masculine presenting and the body they inhabit is A.M.A.B. (assigned male at birth) and “One Day at a Time” has an A.F.A.B, (assigned female at birth) feminine presenting character named Syd. Their characters are not written for the sake of representation, they happen to be gender nonconforming and have their own important roles in the general story.
Representation is very necessary, both for young audiences, cis audiences, and older non-binary people, as it effects an entire minority and the way they are seen by the world and how they view themselves. There’s still a long way to go until norms and stereotypes are broken in society, but through developing good representation, we can achieve just that. 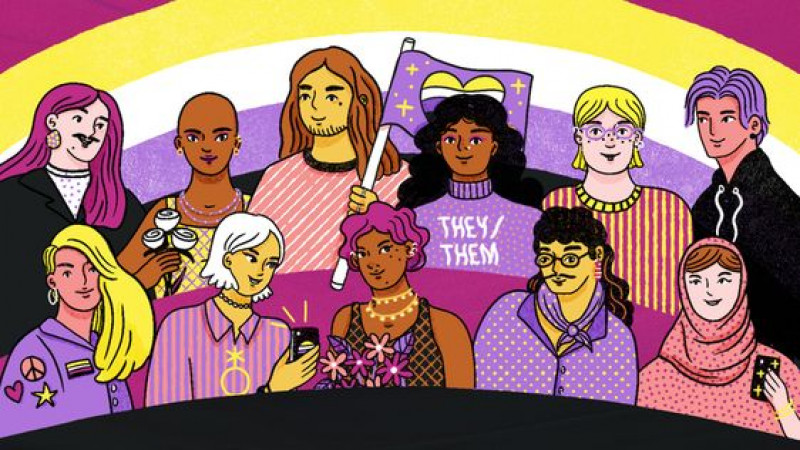 Transgender and Non-Binary representation are super important to me and I think there needs to be a discussion about current modern representation and how it actually effects people.