Famous author Anais Nin once said “She lacks confidence, she craves admiration insatiably. She lives on the reflections of herself in the eyes of others. She does not dare to be herself.”


The Dove Self Esteem Project is a community of people who reach out to teen girls struggling with self- esteem problems and educate them about loving themselves and having more confidence. One of their main goals to get across is the fact that “Social media creates an environment where disordered thoughts and behaviors really thrive.” After a long day of scrolling through our Twitter or Instagram feed many of us teenagers find ourselves getting lost in the world of social media causing us to lose who we are in the process.


It's been debated if social media affects the minds and actions of teenagers in today's generation. Even though it allows us to communicate with people all of the world, the answer to that debate is yes, the 21st generation of teenagers today have been influenced by the posts, tweets, snapchats, and pictures posted online by our idols and even our friends.  Social media has become one of the most dangerous loopholes for teens to fall in. Now days it's almost impossible to avoid.


The realization of what social media is doing to today's generation is frightening. Teenagers are finding themselves sleeping less, having low self esteem, and developing social anxiety and depression because of what they see online.


According to Alexis Sobel Fitts in the article Teens Obsessed with Facebook May Struggle with Anxiety, Sleep Problems, “A survey of teenagers found that those with the most emotional investment in their Facebook and Twitter profiles were most likely to sleep poorly and suffer from low self- esteem, anxiety and depression.” Teenagers emotionally invested into social media seem to have more problems with being happy and accepting the fact that everyone's life is different compared to teens that don’t use social media who find themselves being a happier all around person.


Young teens ages 12-19 are among the most users on social media today. Teenagers typically need about 8 hours of sleep every night, but social media has been linked to part of the reason why teenagers aren’t getting the correct amount of sleep.


Studies have shown that teens who lay in bed at night and are scroll through their feed before closing their eyes are more likely to have a disruptive sleep compared to those who don’t.  “Researchers at the University of Pittsburgh examined social media use and sleep in a group of  young adults, and found that heavier users of social media are significantly more likely to experience disturbances to their sleep….the scientists’ analysis showed a strong correlation between social media use and sleep disruption...”


“Mizuko Ito of the University of California states that ‘spending time online is essential for young people to pick up the social and technical skills they need to be competent citizens in the digital age…’”  Which means that teenagers spending time on social media is helping them learn basic social skills in today’s modern society.
But what Ito doesn’t address is the fact  that spending too much time on social media can take a toll on a person’s health and ultimately lead to teens developing bad sleeping habits causing them to not be able to give their 100 % to more important things in their life besides Instagram or Twitter such as their education.


Over the last generation, the feeling of self-consciousness within teenage girls has become widely acceptable. Thus because of the pictures they look at every time they open a social media app. Teenage girls always find themselves wondering why they aren’t as “pretty” or as “skinny” as the people on their instagram feed. Feeling the need to be perfect or like you aren’t good enough causes teenagers to have high levels of stress and anxiety.
Take this from me, i’ve experienced this first hand. Scrolling through my instagram feed and seeing my friends “perfect” relationships with their boyfriends often left me feeling lonely and that i wasn’t good enough to be as happy as they were. At least once a day i found myself stalking models on instagram. I was always in my head asking myself why i wasn’t as skinny or as tall as they were or why my face isn’t as clear and my hair isn’t as pretty. The questions i kept running through my head everyday caused me to be anxious when someone was even looking at me. It made me feel insecure compared to my  friends. I then became obsessed with trying to be and look perfect. Some teenage girls go to high extremes such as starving themselves and develop eating disorders just to fulfill their need to be perfect or take their feeling of insecurity away.


Inspirational author Shannon L. Alder once said “An open facebook page is simply a psychiatric dry erase board that screams, ‘Look at me. I am insecure. I need your reaction to what i’m doing, but you’re not cool enough to be my friend.’” Teenagers constantly post on social media, not realizing that something they post can have such a huge impact on the way other teens view themselves, often leading them to feel self conscious when in reality most teenagers only post those pictures to boost up their self esteem because they are just as insecure as everyone else.


James Fowler, a professor of medical genetics and political science at the University of California San Diego, did a study on the emotions of people caused by social media. He analyzed 100 million  Facebook users posts in which he states, “It turns out that positive emotions have stronger spreading power on Facebook than negative ones.”  Fowler believes that one positive post can cause someone else to also post a positive post which spreads a happier mood and a more positive outlook for other people compared to sad and negative ones.

But what Fowler doesn’t address is that many people post on Facebook to vent and try
to destress. When venting about something, the tone and mood of the post is typically more negative and even though positive emotions are easy to spread, negative emotions are just as easy to spread and affect others emotions. This can also cause a ripple effect of negative posts.

Modern society today is linked around people's lives which others can see through social media. The fear of missing out (FOMO) is a phobia in which people have anxiety about something interesting or fun that is taking place somewhere else, often seen and caused by pictures and posts posted on social media. Many teenage girls who have struggled with FOMO have been known to developing more serious disorders such as anxiety and depression.


According to Anxiety, mental health specialists say that “pictures of a party where the user wasn't  invited or yet another wedding they weren't able to attend… can take a tole on a person's self-esteem.” Feeling left out and lonely often makes a person feel depressed. Having low self esteem adds even more depressing feelings to a person's emotions.


The University of Wisconsin School of Medicine and Public Health did a survey of 190 students who attend the University of Wisconsin to see if Facebook was linked to depression and “The study found that the survey participants were on Facebook for over half of the total time online. When Jelenchick and Moreno evaluated the data including the depression-screening results, they found no significant associations between social-media use and the probability of depression.” The data that the researchers collected concluded that social media does not affect depression levels in people.

Although the study shows that social media doesn’t lead to depression, there were some aspects that they didn’t consider starting with the fact that they only surveyed a small amount of people. By expanding the sample of people, the data could have been more accurately examined and there would be a chance of a different outcome.

For example, director of Pitt’s Center for Research on Media, Technology and Health, Dr. Primack, did a questionnaire on 1,787 adults ages 19 to 32 to see if users of social media were at a greater risk for having depression and anxiety. Results showed that, “More than a quarter of the participants were classified as having “high” indicators of depression.  There were significant and linear associations between social media use and depression whether social media use was measured in terms of total time spent or frequency of visits.” Dr. Primack and his colleagues surveyed almost 10 times more people compared to the study that was taken at the University of Wisconsin, and he came to the conclusion that social media does lead to depression and anxiety.


Knowing that i’ve struggled with anxiety and depression, realizing that social media was a part of the reason i developed these disorders, makes me wish i could take it all back. Don’t compare yourself to others, love yourself, be active, and stay off of your social media and phones for a while. Once i learned to do this, i became a much happier person. To avoid developing these serious disorders and sleeping problems, try to stay away from social media as much as you can, i promise you won’t regret it. 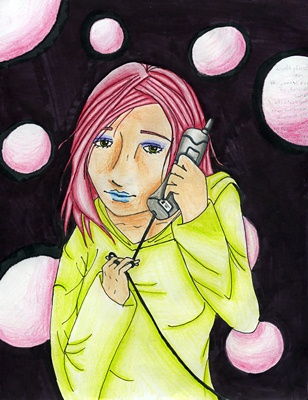