Since a leaked sex tape propelled Kim Kardashian to fame in 2007, the extended Kardashian-Jenner clan have become one of the most ubiquitous families in the entertainment industry. With a total net worth estimated to be around £150 million as of August 2016, it is clear that these women have their fans.

So when Kim Kardashian posts a photo on Instagram, the world watches. Most recently, Kim "broke the internet" in a naked mirror selfie which she posted on Instagram for the viewing pleasure of her 84.4 million followers, citing "female empowerment" as her motive.

I think it is fantastic when women are empowered by their bodies and their sexuality, and I object strongly to the way we, as a society, demonise female sexuality and teach girls that their sole purpose in relationships is the sexual pleasure of their partners. So, no, I don't begrudge Kim a sexy selfie.

The issue, for me, is nothing to do with Kim. To my mind, the issue is two-fold. Firstly, there are the teenage girls who see those photos and think that is what they have to do to be popular, sexy or to get "likes". Teenage girls are already under enough pressure to behave in a certain way to impress boys and these sorts of images only propagate these outdated and damaging ideas. As much of a problem, however, is the teenage boys who see photos like this and think that it is their right to expect girls to act in this manner and who conclude that any girl who doesn't fulfil such a request is a "prude" or "uptight". If Kim Kardashian feels empowered by taking photos like this, then far be it for anyone else to begrudge her the opportunity. But as a women who has built a career off of a fan base composed predominantly of teenage girls, she has a duty to recognise that she is a role model to these young women and to try to behave accordingly.

Young women need someone to tell them that they have so much more to offer the world than their bodies. Kim, with the admiration she garners from many of them, would be the perfect person to do this. Instead, she has chosen to teach them that the best they can do is expose themselves online. That the greatest assets they possess are their bodies. That the only thing that matters is what they look like naked. That's not female empowerment. It's objectification, it's degradation and it's a problem. 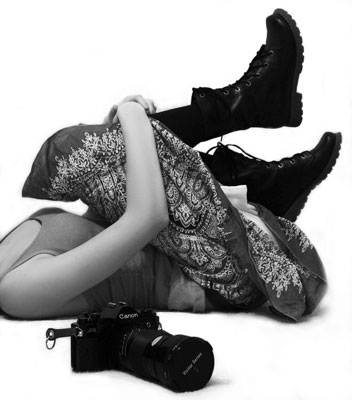