Advertising is everywhere. Not just on TV or in magazines or on billboards, but literally everywhere. It has been enclosing upon us in every direction so that we now turn a blind eye toward it. Some of us aren’t even aware that we are being suckered into the advertisements that we view as just another picture or just another free sample. By Alissa Quart, Branded is a revealing book about how advertising has affected teenagers. It describes how advertising has encroached into our schools and we don’t even realize the consequences. It also tells about teenagers who advertise to other teens and the effect of it on both themselves and the other teens. Lastly, it informs us of the little-known statistics on teen cosmetic surgeries and the justifications the teenagers have in doing it.

Our public schools: once thought to be a place of safety, learning, and growth are now infested with advertisements. More and more middle schools and high schools are being sponsored by corporations. “Teenagers not only play ball in gyms rimmed with logos but also spend their English classes coming up with advertising slogans for sponsors, all under the auspices of their so-called public high school” (11). Quart makes a fine point in describing all of the places that advertisements can be found in our schools. “One hundred and fifty school districts in twenty-nine states have Pepsi or Coke contracts. Textbooks regularly mention Oreo cookies, and math problems contain Nike logos. Companies from Disney to McDonalds promote themselves within secondary school walls by holding focus groups about their new flavors, toys, and ad campaigns” (11). In one school, a student who wore a Pepsi shirt to a Coca-Cola sponsorship day was suspended for voicing their displeasure at the presence of sponsors at school. That is how ridiculous and what seems only to be described as desperate companies are getting.

Corporations are now recruiting youth to advertise to their own generation. Rhonda Shasteen, vise president of global marketing tells Quart, “Kids will pull out [our] product after gym class, start a conversation: â€˜My mom’s a beauty consultant, I can get you free samples.’” Avon has even started a new line of cosmetics, body lotions, and jewelry for teens, hoping that Junior Avon ladies will market their products to their friends. “..Peer-to-peer [marketing] is based in part on the belief that kids are sophisticated” (47). Quart describes the term, cool hunters, as the adults who market to teens and sign them up so they will market to others of their age group. They find that teens start to buy what their friends buy, so this is a very successful way for companies to market their products. The cool hunters, “â€˜...Act like friends and chit-chat with them,’ says...Clair Ramsey... â€˜I mean, they can feel the difference if they think we are stealing ideas from them and when we are forming relationships with them. We want to make them like us as we want the relationships to last’” (42). To me, personally, this sounds like a load of you-know-what. These adults don’t want “lasting relationships”; they want to keep their job in marketing, so they manipulate teens into working for them.

Another technique companies use is a method called “seeding”. What corporations do is give out free merchandise to the “most popular” cliques at schools in hopes that everyone will want to be like the popular kids and buy their product. This was proven with the supposed seeding of Converse sneakers during the 1980s. The Converse craze during that decade is one of the teen marketer’s “most cherished narratives”.

One more disturbing thing that Quart confronts is the Cosmetic Surgery Industry and the effect on teenagers. The number of aesthetic surgeries in teens eighteen and younger from the year 2000 through 2001 increased from 65,231 to 79,501. That’s 21.8 percent. Girls are getting more-perfectly-shaped noses and bigger breasts than ever before. All they need is a willing doctor (they usually aren’t hard to find) to qualify the work to be done as a “medical” surgery as opposed to a merely “cosmetic” one. Then they just have their parents sign the consent form. “â€˜It’s totally common for people to have their eyes done, their chins implanted, their ears pinned back,’ says Mara, a seventeen-year-old swan of a girl from Miami Beach...â€˜My friend went to Argentina for the summer and got surgery doneâ€”it’s cheaper there’” (115). The cosmetic surgeries are advertised not only in the doctor’s office, but in other, more viewed places as well. There was an example of one plastic surgeon who had the letters of his license plate changed to say “BOOBS”. And we’ve all seen the delightfully “perfect” models in advertisements in magazine and on TV marketing for random products such as hair de-frizzler or Kool-Aid. Now, however, these same models are actually advertising to teens to alter their bodies surgically in order to be the publicly accepted version of “perfect”.

One girl, Julie, first realized she wanted to get her $6,800 nose job when she was reading some magazines and she noticed the girls’ perfect bodies. “â€˜There are all these perfect things all around you and you realize you don’t look like that. In all the advertisements, there are no fat girls, not big-nosed girls,’ she says. â€˜When I was a girl, all the movie stars had surgeryâ€”all those people did, went through is, why can’t I?’ she adds” (117). She talks about how when “everyone” started getting nose jobs and liposuction, the procedures seemed less vain and iconoclastic.

The point Alyssa Quart is trying to make in writing Branded is to help people realize and deal with the effects advertising has on teenagers. Not only is it affecting our minds, but our wallets and bodies as well. Teens are being influenced upon in our places of learning, our public schools. Teens have also started being “recruited” to advertised to our their generation under false pretence that they are making friends with adults who only care about brainwashing the teens in order to keep their job and sell the most product! Now, I know I’m probably using the worst possible scenarios, but the idea stays the same. Teens are being advertised to in the worst possible ways. We have even started surgically altering our bodies in order to fit in with society’s vision of “perfect”. It’s not healthy and it’s not worth it. 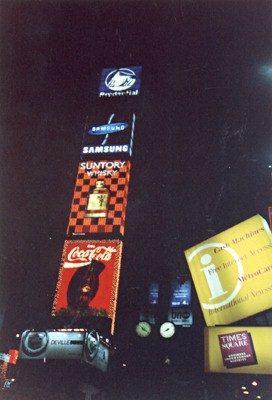 nevermoore said...
on Dec. 13 2008 at 4:01 am
Thanks so much to Randall H. for bringing this out! How horribly pervasive this problem is in our society! I'm an aunt, not a teen, but it occurs to me that if we are to force our kids, by law, to attend school, we should not allow them to be forced to be around all this advertising. In fact, there ought to be a law against it. If you start a petition drive, sign me up!