THH: Because the 15th Season Tends to Suck...

What is with this everlasting lake called TV Shows Often Never End? Its waters have sunk and taken many brave ones asunder, and no doubt more to come.

No, seriously: why does shows elongate out to a 10th or 11th season? (Not that all us diehards are really complaining, but still?) Why do we tend to feel a bit nauseated, or even exhausted, by the time our 173th episode airs?

We can fulfill the unquenched question by looking at a few exceptional TV shows and how even some of their most devoted fans are starting to riot.

Ever since the unfathomable classic short story “A Study in Scarlet” was published by Mr. Doyle in 1887, there have been nothing short of countless reproductions and reimagining over the generations. Here, we jump forward in time to the explosive phenomena of Benedict Cumberbatch’s 21st century take, known simply as “Sherlock.” The show has had a notorious history of only three movie-length episodes per season, and the interval of wait hit screaming fever pitch in 2013. Awaiting its Season Three, there were thousands of theories and head canons launched online.

So when S.3 actually did air, all three of its gloried installments, there were mixed feelings. Many complained the show had become too emotional, less dependent on reason, and “not enough deductions!” Some even threatened to no longer watch the show if it carried on similarly.
So what had done this discontent in for? Hiatus. Like so many of the Tumblr blurbs have described, the wait and prolonged ‘feels’ ruined a few too many of their reactions. Because when a person waits, their mind starts to get critical. Your brain subconsciously (or sometimes not) wants to be in control of the situation. And so ensues analyzing, critiquing, and one’s expectations skyrocket. This could have been what happened with Sherlock’s S.3, and why many viewers’ opinions vouched for less than satisfactory.

Who doesn’t like a good scare? CW’s Supernatural has a humongous audience captured with glazed (and often teary eyes), having earned its reputation on Pinterest, Tumblr, and Twitter as a true hooker. It stars two brothers (Jensen Ackles, Jared Padalecki) who become hunters of evil supernatural forces, after their father.

Already one with a reputational cast and having known to break the fourth wall in literature, many see no remote reason to hate on Season Eight or Nine. (I, in personal contact with a few especial addicts, have witnessed such obsessions) But critics have already dubbed its plot “unoriginal,” actors merely “pretty faces,” with ‘not too bad’s in other addresses. And with Episode 23 of S.9 having aired out in May 2014, the show will have run for a nearly nine years. The question is: where does it stop?

Many viewers have already begun to question exactly that. A few repeats in episodes, have been noted and often been turned controversial, and it seems unlikely something as colossal as the apocalypse can be topped off in the near future. Others fret that the show will truly just run out of juice to juice out, or the prized leads will get up and go.

The source of madness here can first go to the credit of critics. First of all, they are paid to desiccate shows, and have often more experience available through countless years of accumulated memories. And not all of them earned their jobs through tiered family blackmail; there’s a reason they’re acclaimed for their destructive words. (A little Simon Cowell, anybody?)

Another possibility is the fact, I repeat, the show has been running from 2005-2014. Many of the watchers addicted to the original pilot are not the same people who see S.9 today. Their interests could have shifted. Babies have been made, and people have gotten grumpier. Put simply, some of those fans just aren’t the same people they were (about) a decade ago.

It has often seemed like no one can get enough of their favorite TV show nowadays, and anyone else disapproves of how that show turned out. (Category Three is made up of perfect cyborgs that have no problems in life) A good deal of shows yet to be thought up and released are likely to face this obstacle too—and that could be a good thing, even. Don’t panic, I actually mean this one. Because our little lake of TV Shows Often Never End doesn’t just mindlessly drown: it also can cleanse for the better. 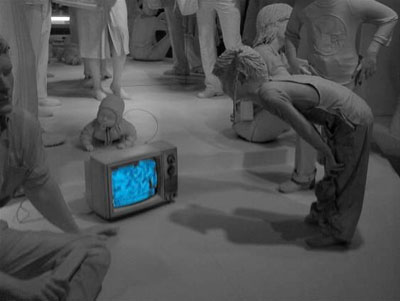 The author's comments:
What does "THH" stand for? Good question! It's THE HOLY HITCHHIKE... No, I’m not even religious. The name is Ala Nova, and you have entered the domain of my discussion, thought, and paraphernalia. Enjoy, and let loose your commentary and suggestions below. A new column every Friday!
Post a comment
Submit your own