Throughout the years, the minimum wage argument has divided the United States radically in two. By definition, the minimum wage refers to the amount of payment you could give at the lowest to, in most cases, a lower job level employee. The minimum wage was first introduced to “stabilize the post-depression economy and protect the workers in the labor force” (Equitable Growth), as stated by the US Legal Information Institution; in particular, it was established to protect workers against unduly low pay and to ensure an equitable share of the fruits of progress to all. The minimum wage was initially created under the Fair Labor Standards Act of 1938 and has been around ever since (Toggl). The current value, amounting to seven dollars and twenty-five cents per hour (USD 7.25) is in place since July 2009 and has been object of intense political debate throughout the United States. The two major positions are those proposing to increase it (leftists), and those in favor of either maintaining it at USD 7.25, lowering it, or even completely in favor to abolish it (political right).
In current times, the most favored argument is to increase the minimum wage.  Joe Biden’s current proposal is to increase it to 15 USD per hour to align with an increased cost of living and to adjust to the inflation. Assuming that the worker works eight hours a day for five days a week, he would get a monthly payment of USD 2,400 per month instead of USD 1,160 (Legal Information Institute). The advantage of this proposal is that it allows lower-class jobs to reach better standards of payment for their workers and to enhance the purchasing power of the poorest.
Raising the minimum wage also comes with multiple economic benefits, as it “improves family incomes, especially in women-led households” as well as it “affects job prospects for low-wage workers, the unemployed, and youth entering the labor market”, according to the Washington Center of Equitable Growth.
Yet, it also comes with several drawbacks. According to the projections made by OP-ED, an increase to a 15-dollar minimum wage would immediately erase 1.3 million jobs throughout the United States. With such a high minimum wage, companies and small businesses would not be able to pay salaries to all their employees and would be obliged to fire the less important groups or reduce some minor or unnecessary services and positions. Therefore, there is a risk that these targeted by a higher minimum wage (the lowest class) would ironically become the most negatively affected by this intervention. Some economists also argue that such an increase of the official minimum wage would also encourage the development of the informal economy, undeclared work and fragile contracts with limited, or no benefits and give rise to indecent and/or unsafe working conditions (ProCon).
Those in favor of maintaining the minimum wage at the level of USD 7.25 per hour instead would claim that the maintenance, or in some cases, the decrease of the minimum wage would end up bringing more positive spillovers to the whole society. Part of the reason for this argument is that decreasing it or keeping it at the current level of EUR USD 7.25 per hour would sustain the dynamism of the labor market, enhance competitiveness, and create more job opportunities as companies and small businesses are able to employ more people with the same capital.
In conclusion, the debate between the two parties on the minimum wage underlies different approaches to fiscal, economic, and employment policies and different visions of the mechanism to ensure growth, development, and wellbeing for all. For this reason, the minimum wage argument cannot be analyzed as an isolated active labor market intervention but placed in the larger political environment, as a part of a bigger debate on income distribution, inclusiveness, and equity. As every four to eight years the US President changes, the argument will remain heated, and more will be heard in regard to it. Although projections can show us what is going to happen in the future in a relatively accurate way, only time will show which side was more correct and which intervention more successful about the minimum wage in the United States. 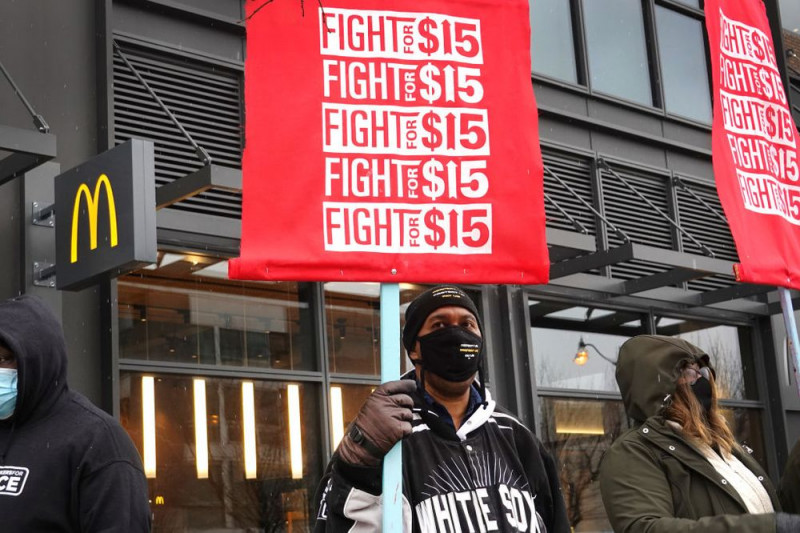 This is an Explaining Concepts piece of writing, that analyses both political proposes in concern to the minimum wage. It goes in-depth to analyze the positive and negative effects of what republicans and democrats believe about the minimum wage.