Every species has at leastone natural predator. The rat has the snake, the rabbit has the hawk, many havehumans, and, I'm sorry to say, humans have humans. Are we destined to destroyourselves?

We have the power to unite the world peacefully, yet we pourour effort into the manufacturing of weapons, devices that have no other purposeother than to slaughter. Nowadays wars are not fought blade to blade, but withone stroke of a button lives can be tossed aside without the blink of an eye. Theperson who pushes the button doesn't even have to see the damage, the pain he orshe has wrought or the lives destroyed. And the weapons only seem to be gettingmore powerful.

Since World War II there has been a massive armsrace between the world's powers. Both the United States and Russia (with morethan 20,000 nuclear warheads between them) still have more than enough to bringthe world to a screeching halt. Britain, France and China round out the top fivenuclear powers, and now other nations like Pakistan, India and North Korea arecatching up.

We are concerned and scared. It's the same concern and fearthey have of us, the fear that we will use our weapons. They believe it's theirright to have their own nuclear weapons, and it's hypocritical for the U.S. totell them otherwise. It's clear that their motivation for wanting nuclear weaponshas to do with us having nuclear weapons. It seems only fair, right? And who isto say what nation is more responsible with that power? It is not like the U.S.is perfect and hasn't dealt our fair share of injustices. It's not like wehaven't had slavery or internment camps, been the only country to use the A-bombagainst many innocent people, or harassed those with different political agendas.So why do we get to set the rules?

It seems as though there is alwayscompetition to be the most heavily armed nation, but we are treated like littlechildren when we ask why. We are told that we have these weapons to defendourselves, and keep peace. Yet no peace is being made, and as a nation we seem tobe involved in many of the world's conflicts. It is time we, the reigningchampions of this international arms race, put down our bloodstained title andwelcome peace. Not until we break this destructive cycle will we all live inpeace. 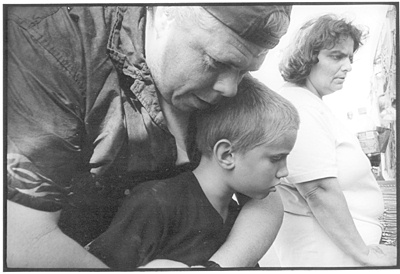