How much do teens really know about who is running the government? Are they really so poorly informed that they cannot even name the governor of their state? Is it possible that the majority are not even interested? Most students lack what should be general knowledge about how their town, state and national governments operate.

You might not remember who the justices of the Supreme Court are, and you might not have even heard who your state's Lieutenant Governor is, but sadly, I found that most students do not know Colin Powell's position. After conducting a survey of a large number of my fellow students, I found that 40 percent couldn't name the Vice President of the United States, 67 percent couldn't name one of our state's senators, 70 percent couldn't identify the governor, and 74 percent didn't know what Colin Powell does. These results paint a vivid picture of how poorly informed teens are about government.

It seems next to impossible to make a significant impact and have a strong voice in politics if you are not informed. Susan B. Anthony and Martin Luther King, Jr. couldn't have made a difference and fix injustices if they didn't know whom to go to or how the government works. When you have knowledge and desire, you can make change.

Even working at a more local level, making an impact requires knowledge. How can elections be fair if the voters do not know about the candidates? Uninformed voters could result in a national popularity contest, where there is a possibility that unqualified people will make decisions that affect our lives. Although voting may be years away for many reading this, your decision-making would be greatly hurt by walking into a voting booth lacking basic knowledge.

Is the lack of interest a result of not caring about how the government is being run, or are there influences that shape what people know? Perhaps this disinterest in teens can be traced to the media. In a culture that thrives on MTV, gossip shows and celebrities, it is no surprise that most teens know more about who's running for governor of California than how their own school operates. It seems that the media spoon-feeds what it wants people to know about politics. Do the names Gary Condit and Monica Lewinski sound familiar? It is no wonder that people are only interested in politics when scandals occur since that is what the media thrive on.

Perhaps the educational system could help get students interested. I cannot remember the last time class time was set aside to discuss the current dealings of our national and world leaders. Simple current events discussions could do a lot to grab more student interest.

There is always the possibility that no one really cares about what is going on until it affects your life. Maybe this is how it has always been. But does it have to be that way? A greater interest by students could make a difference in how government is run and give us a bigger voice in town, state, country or even world events. Could you dare to take an interest in how decisions that affect your life are made, or would you rather just let it be someone else's problem?

Changes can and have been made by unlikely groups. With a strong knowledge of government and politics, we can make a difference in influencing how government works. 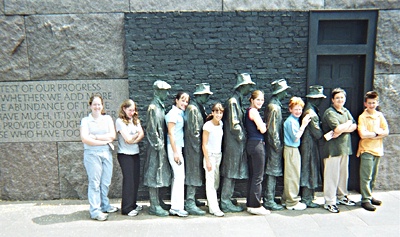