Living Off The Grid in Alaska | Teen Ink

Living Off The Grid in Alaska

I arrived in Anchorage, stopped for some chicken tenders, and met up with my leader. So far, only one other girl had arrived. He led us to the van and proceeded to drive us to the 1-star motel where a rottweiler was chained up against an old, rusted trailer parked next to the lobby. I was a little suspicious, but it was all a part of the experience… right? As we walked to our room, the cleaning lady was standing outside of it smoking a joint with a young boy. We awkwardly smiled and waved with our purple youth group t-shirts on. We met up with the rest of the group later that night, had a decent night of sleep, and hit the road in the morning.

Our first campsite was in Denali National Park. This campsite had bathrooms, trails, and overall was very nice. It was packed with other campers who were pretty noisy and the weather drastically changed at night. I went to bed with shorts and a t-shirt and woke up at 4 in the morning with the sun beaming at me while I was shivering in my uncomfortable sleeping bag. Little did I know, the sleeping conditions only got worse as time went on.

Later at this campsite, we went on a bus tour that is closed off to visitor vehicles. It was a 6 hour tour. One of my tent-mates is a photographer and took some amazing photos of the wildlife.

Our next campsite was the most remote. We stopped at the lodge before we left to take showers for the first time. They were public showers covered with hair, bugs, and nasty stuff on the ground, I give it a 10/10. I was in desperate need. After we all showered, we took a speedboat out to the campsite with a friendly guy named Zack. There were 5 huge tents that were set up and a larger tent for us to cook and eat in. We also had an outhouse named Allison, it had a great view. This campsite was absolutely beautiful. We sat around the campfire playing a very intense game of Mafia and roasting marshmallows.

The next morning we embarked on our 5 mile hike to the Maclaren Glacier. You could tell from the beginning that groups were splitting based on speed. We crossed our first stream with a bridge. Our next crossing did not have a bridge which meant we had to get our feet wet. Again, half the group was fine and the rest didn’t want to. It took almost 30-40 minutes to try to convince everyone to cross, we weren’t even a mile in. Everyone ended up crossing even though some people didn’t want to which led to awkward silence majority of the hike. We noticed that more streams without bridges were coming up and knew that some of the group wouldn’t want to continue. We made a pit stop to climb a pretty big hill about a mile up. It was a beautiful view of all of the land, especially the glacier. At this point it’s already been almost 2.5 hours and we had at least 3 miles to go. Long story short, we came across another stream where some people did not want to cross, and we had to turn around. It took another 25 minutes to make that decision. I really wish we could’ve made it to that glacier. But our leader took some of us on another hike where we crossed streams triple the size and current of the other ones. We also found loads of caribou poop and skulls, I was a little nervous but it was really cool.

Our next campsite came with 2 extra guides named Kaajh and Becca. They were always smiling and helped us all so much, they were both amazing. This was the BEST campsite. It felt very secluded and we only had our backpacks for 3 nights. To go to the bathroom we had to go in a hole and cover it with dirt, it wasn’t as bad as you’d think. It definitely came in handy when I had to pee at 4 in the morning and the sun was still as bright as day. The tents, bear box, bathroom, and kitchen were all spread out pretty far from each other. Not having a shower for these 3 nights was definitely a struggle. It rained a lot and the mosquitos were the size of my hand.

On our first full day at this campsite we embarked on our second hike of the trip. This one had no stream crossings; however, it was uphill the entire time. I was so excited for this hike and was determined to get as far as they let us. In the middle of the hike, a few people decided to turn around with one of our guides. We had a long way to go. By the end of it we were all so happy and proud of ourselves. It was a 7 hour hike completely uphill. We were not able to make it to the peak because of the rocks, but we went as far as we could. We went down and ordered some hot chocolate. The next day was also an active day full of ice climbing. This is what I was most excited for!

This experience was insane, I didn’t even know ice climbing was a thing! When I was up there I could hear the rest of the group cheering for me and I just felt so genuinely happy. The adrenaline was pumping. Since the pandemic started I haven’t felt much adrenaline, ice climbing reminded me how much I love that feeling. It made me feel alive.

At this campsite we played a lot of games around the campfire, shared stories, ate some amazing peach cobbler made by Becca, and just enjoyed the time together.

Our last day event at this site was pack rafting. I had never pack rafted before. We wore dry suits since we would be in water coming directly from the glacier. We blew up our own rafts which took a pretty long time for some people, and then carried them over to the lake. It was incredible how light they were. It was very similar to a single kayak, just much lighter and a little harder to control. This was a very relaxing day on the water. I loved this campsite so much, but I was ready to leave. After all of the activities we did and all the sweat that came with them, I needed a nice warm shower. Unfortunately,  our next campsite did not have a shower.

Our next campsite was the loudest. We were right next to the highway, but we only stayed there for one night. It was pouring when we got there so a few of us played a card game called “joker” under a tent. It was a relaxing day.

The next morning was very exciting because we were going WHITE WATER RAFTING!!! In the beginning, I wasn’t super excited for it because I’ve done it before and I didn’t love it. But right when I got on the boat I was so happy, I couldn’t get the smile off my face. I was in the front row, I jumped out a few times, sat on the edge, it was really fun.

The final campsite was in Seward. This campsite was very close together, our neighbours were basically our tent mates. Everyone could hear everything through the tents or talking outside quietly, there was NO privacy. BUT there was a beautiful view of the water, and they had showers!!! This shower had a time limit, I only had 6 minutes to clean myself from a whole week of living in the woods. This one was also a public shower, but it was dirtier than the other one. The rest of the night we hung out, passed out Rustic ties, and went to bed.

The next day we went on a wildlife boat tour. I was a little nervous of getting sea sick so I took some Dramamine, I fell asleep almost the whole time. I saw some of Ashleigh’s pictures after of some sea otters, orcas, seals, and more. The photos were amazing!!

After the boat tour, we got in the van and headed back to our beloved 1-star motel with the Rottweiler chained up to an old, rusty trailer. But we had some car troubles. Our old van lasted so long on this trip without any problems, it had to happen at some point. We had to hop in a different van while another guy drove ours to get fixed. I don’t really know what happened but we got back to the motel around 12 and ordered some pizza. Then some lady got rushed out by the ambulance… Motel things. 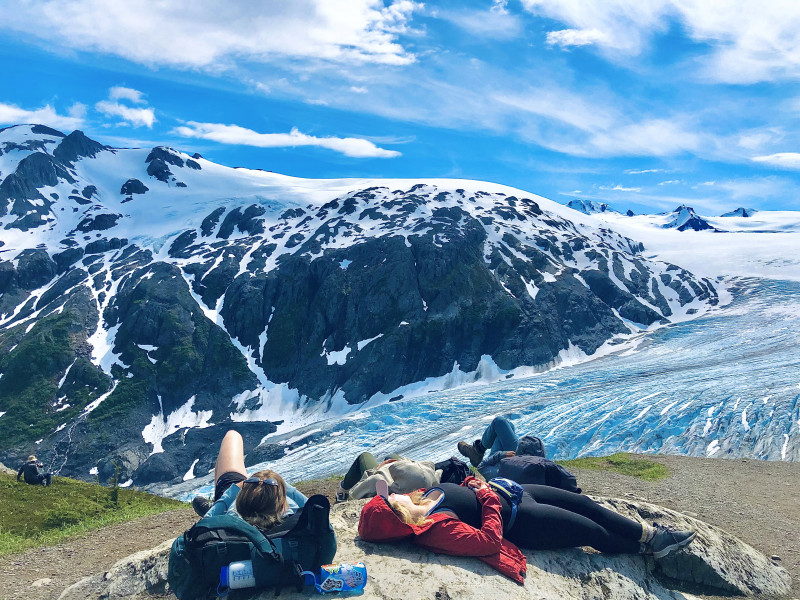 My name is Tristan and I am not a writer, but I love to write. I am a 17 year old high school student in Illinois. I would love to become more knowledgeable in proper grammar and writing. I am considering studying journalism in college.
Travel has always been an important part of me and my family's lives. When I travel, it sparks a fire in me that makes me feel unstoppable. I started my blog in hopes of working that fire and inspiration in others.
This piece specifically was about a trip I took 2 weeks ago to Alaska with a teen group organization. We lived in the woods, hiked, ice climbed, and went on many adventures that I thought would be interesting to share.