Favorite Quote:
"'Will they see?' bear said. 'In the next cycle, do you think they'll see how beautiful everything is?'
'Sometimes,' goose said. 'only sometimes. All the time would be too much; never would be too little.'" -exurb1a

Two sleepless days of traveling – from car to flight to layover to connection –  made for a grueling journey. The huge plane spat us out like watermelon seeds at the quiet outdoor airport. The sky was pitch black; we were tired. Our rental Jeep looked like a silver beetle as it scurried out of the Kahului city limits. Its tires squealed, compelling my wish for the journey to end. Minutes passed like hours as each chorus of “Are we there yet?” was met with groans from my exasperated family. The dark, silent road had an air of mystery that held us in total suspense; it was as if the entirety of our trip had only led to a dreary cliffhanger. Upon finding our room, I fell into bed before unpacking my bags, knowing that morning would come faster if I could stop the long day of traveling in its tracks.

The next morning, even the jet lag couldn’t quell my excitement to get out and explore the island. We gathered our many bottles of sunscreen and quickly brushed our teeth. Having avoided our luggage as if it were filled with bees, we were left with a swarm of jumbled clothing that made early beach access nearly impossible. Eventually, we found wrinkly bathing suits, mismatched flip-flops, and flattened hats; our efforts would all be worth it in time. With only one hour until the warmest part of the morning, we ran across the street to the local snorkel and dive shop. We loaded our gear in the minuscule trunk of the Jeep and sped toward Kapalua to brave the early morning waves. We were hoping to see one of the many Honu, or Hawaiian Green Sea Turtles, who occupy the surf.

With the windows down, the wet air smelled of salt and palm. The winding roads made me feel like a leaf on the waves, bending and breaking until reaching the shore. The sand looked like snow, smooth and shiny, where the only impurities were those of freshly made footprints, untouched by the wild waves. My mask felt tight and my fins left blisters, but the freezing rush of the salty ocean over my feet calmed my mind and excited my heart.

We found our way to the deep water; the cold currents granted us a split second to look around. The shoreline was far away, and the people that lined it looked like ants. My mother was close behind me, watching me take in the watery scenery. She pointed toward a rocky cove I hadn’t noticed on my first scan of the surf, and we started swimming toward it.

The currents were strong, but we were stronger, pushing full force against the waves that lifted our bodies like abandoned surfboards. Poorly-made snorkel gear propelled our feeble frames through the mountains of foamy whitecaps, sending salt down our breathing tubes and dehydrating our mouths. The waves slowly decreased in size as we approached the protected cove of the bay, a medal of honor for our bravery in the wild drink. Our paddling turned to peaceful floating, and the once-wild ride through the deepest parts of the bay became sailing through a glowing city of fish and coral. We spat the salt out of our masks and paddled through the cove, but the coral was a siren, drawing our faces back to the window of our blurry masks to observe the bustling city below. The water opened with dynamic light and shadow over the deepest part of the cove, our bodies floating, watching the water as we rested.

It began as a dark creature, its silhouette floating as if it were suspended in time. The oblong rock waved its long appendages in a movement that looked the way a symphony sounds. In the silent waters, I could hear nothing but the music of the creature. Its beauty removed me from my consciousness, transporting me to a dimension of calm where nothing could be heard but the changing of the currents. Untouched by man, each geometric piece of its shell fit together like a jigsaw puzzle, perfectly customized for the creature alone. Dainty jet-black fish trailed the back flippers of the gliding soul, unaware of the majesty before them; each one silently pulling pieces of algae off the mysterious, moving rock. As if unaware of the beauty of its presence, the lonely traveler seemed to incline its path toward the sky, putting on an unexpected show after a long day of adventure. The Honu came back down from the surface and simply continued on, just as it had for centuries before, and just as it would for centuries to come.

Speechless, I swam toward the silky shore, eager to re-watch the recording I had taken of the incredible rarity. Shaking the salt out of my hair, I laid my fins out next to the rough beach towel. Exhausted more than I had been from the flights, I wanted nothing more than to return to the chilled water and continue my search. A new spark ignited my craving for adventure, and I was no longer phased by any pains the long swim caused. I had been inspired by the beauty of the silent traveler, eager to understand the serenity of its endless movement. The little video clip that remained on my phone did no justice to the turtle’s majesty, other than trigger my memory of the experience I couldn’t erase from my mind. The grace of the Honu’s unchanging journey exhibited the pure freedom and beauty that adventure holds. On the ride back from the bay, for the first time, I did not feel exhausted. I was invigorated by my journey. 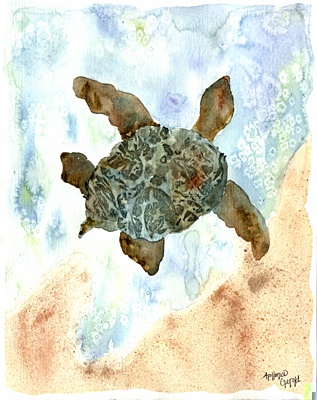 I wrote this piece for an English assignment about the things I carry with me, based on the novel The Things They Carried by Tim O'Brien. I carry a turtle charm with me to represent the account I wrote about for this assignment. The account is from a trip I took to Hawai'i over the summer and the things I learned from long travels.