It was hot and humid that extraordinary August day, but I energetically made my way onto the soccer field for warm-ups. As I took a deep breath, the air seemed dense.Waiting in line for my turn to shoot, I peered at the distant gray clouds. Memories of the fun of the previous games flashed through my mind, filling me with excitement. We had gone from a bunch of individuals to a united team playing in the championship game. I snapped back to reality as I heard my coach say, "Here's the line-up."

A cool breeze pressed against our motivated faces. We stood on the field, waiting for the sound of the sharp whistle. I was so excited, so ready to work hard and have fun! We ran up and down the field against the adversary. Danielle, who played forward, looked determined as she sprinted like a bullet. From the left side she shouted, "Cross the ball."

From the substitution line Christine came in for me as I ran off panting. When we passed each other, we gave a high-five and she said softly, "Good job, Rach!" Making my way off the field, I grabbed my water bottle and sat. As I drank, I noticed the storm clouds were rolling in fast and heading straight for us, but I decided not to get worked up, and cheered my team on.

Halftime swiftly arrived with the score still 0-0. We sat quietly around our coaches, listening to their words of advice. Coach

Larry stated, "Girls, always be on your toes and ready for the ball, because we want to take any chance to score we can." As I listened, I poured water in my mouth and ate juicy oranges.

Before long we were back on the field and ready for the referees to blow the whistle again. The second half began with everyone really pumped. You could hear the crowd cheering hard for us. Katie sat by the coaches with her crutches yelling, "Go, Rumble!" Coach Gerry yelled encouragement.

Out of nowhere, the opponent shot the ball that landed hard against the back of the net. Everyone seemed slightly bummed about this goal, but it made us even more aggressive. We had many chances on goal but none wanted to go in, but we still had hope. As our chances grew slimmer, the weather also worsened. With only eleven minutes remaining lightning streaked across the sky.

Then the rain came down hard and everyone sprinted to a small shelter. I was wet, cold and frustrated. I couldn't believe this was happening at the big state championship soccer game. I sat, repeating to myself, It can't be cancelled; it can't be cancelled. Meanwhile, the referees were in their tent making the difficult decision whether the game would be postponed, or ended. Finally, the ref came over, saying, "The game will not be continued due to the weather and it is officially over. Bloomington is the state champion because you already played two-thirds of the game."

I was so mad and disappointed that the biggest game of my life came to such an abrupt end. I thought, I cannot believe we did not get to finish the game. I thought that if we continued the last eleven minutes, we would have scored a goal.

But, as I looked around and saw the parents who were still so proud of us, I realized that it was also great to receive second in state. My teammates also understood this and felt joy and excitement.

Stepping up in front of the parents, coaches and players to receive my second place medal was great. I felt confident and overwhelmed with joy. I realized how lucky I was to be there and experience this amazing state championship soccer game.

The memories, excitement, sadness and fun of the game (and all the previous ones) overflowed in my mind. And, I knew that this year of soccer would be a great memory forever. 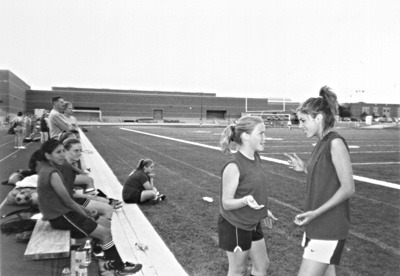