Giving Up the Gold | Teen Ink

Giving Up the Gold MAG

They didn’t understand why I did it. They ranted and sputtered and shook their heads, but they didn’t really understand. And I don’t blame them. It made no sense. I shattered their hopes and willingly gave up what my school values above all else - I stopped playing sports.

In my small mountain town there are only a few things students do on a Friday night, among them: getting out of town or getting over to the school where the lights are on and the band is playing while the football players psych each other up in the locker room. The concession stands hum with activity, producing a hamburger in two minutes and a chili dog in one. Girls prance on the sidelines, proudly sporting their boyfriends’ letter jackets and wearing their jersey numbers in blue paint on their faces. Middle-schoolers mingle, desperately trying to seem older than they are.

In the winter, everyone crams into the school to watch basketball and our expensive gymnasium, of which we are so proud, becomes a can of sardines that smells like socks and pretzels. We boil in the muggy air, but nobody cares. A bad warm-up CD pounds through the air like a heartbeat on speed, blaring a frightening mix of rap, country and the Star Wars theme song. Hype permeates the gym like static electricity, shocking every player and fan with an adrenaline rush that can only be found at our high school on game nights.

And I will admit that I, too, surrender to that rush of excitement that floods the veins when the game begins. I deafen my friends with wild applause and glass-shattering shrieks of “Go Bruins!” I love to watch, I love to cheer, and I love to play.

But I don’t play. Not anymore, at least. And that’s what they don’t understand.

In all honesty, I have trouble explaining it myself. I mean, I had it - I had the talent needed to make it in high school sports. I could have been good, and I knew it.

So why did I quit?

I’ve given that question a good bit of thought over the past two years. I have searched my heart as I sat in the stands and watched my former teammates cheer each other to victory. I have wondered as we all gather for pizza to congratulate our basketball teams. I have doubted my decision when I sit alone in my room after school, bored and hoping I’ll have something to do this weekend.

But then I remember.

I remember the look of disappointment on my best friend’s face when I told him a track meet prevented me from going to his birthday party. I remember the wistful note in Rachel’s voice when she told me on the phone that she would really like to see me again. I recall coming home to a dark house and a cold dinner on an empty table. I think of the prejudice that began to seep into my mind, the contempt for those obviously not as athletic as I. There was the day I felt like cowering in my bedroom and never coming out because my teammates thought I was faking an injury. And then there was the time when stress and exhaustion and fear of failure forced me to take medication in order to get a good night’s sleep.

Don’t get me wrong, I have nothing but respect for my peers who work hard to do what they love. But as time passed I began to realize that high school sports required something from me that I was not willing to give: my identity. I surrendered my friends, my family, my writing, my compassion, and my health to do what I later realized was a self-conscious girl’s pathetic attempt to be recognized. I wanted affirmation and I used athletics to get it.

So I gave it all up. I surrendered my desire for acknowledgment for something far better - the ability to be myself. I still love sports. And I still play volleyball at our recreation center and swim with friends and play basketball at youth groups and run every day; I cheer on my friends and I paint my face at games and I know all the cheers. Most of my school still doesn’t understand, but that’s okay. Quitting gave me the courage to break taboos, to ignore the pitying looks and the sputtering protests of coaches and friends. I have learned to have fun without sacrificing myself.

So, the next time you come to my school for a game, keep an eye out for me: I’ll be the one screaming my head off, jumping around and shouting corny cheers from the sidelines. Don’t feel sorry for me, don’t tell me how I could have been such an asset to my school - I know all that. And guess what? I finally don’t care what you think. 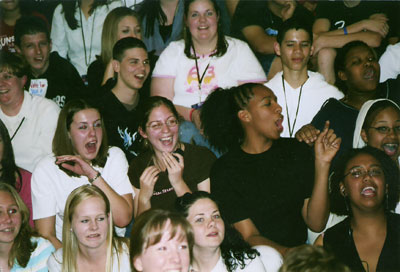