In my family, death was just a happy passing. I was never taught about the concept of death just that when you die you go to heaven. That always seemed like a happy passing to me as a child. The fact that when you die there's this bearded guy waiting for you at some gates into your new life. It all seemed like the real thing. You're born, you grow up to be an adult, then a senior citizen, then you die, and right after you close your eyes, boom, you're in heaven. But death wasn't something that I could just get a grasp of.

I never really experienced death until I was about 6 or 7 My uncle died of heart failure, and I didn't know how to feel about it. They told me he was dead the day before his funeral. How is a 6-year old supposed to know what death is? I mean at this time I was learning about how to add numbers together, not how to deal with the death of a loved one… We went to a venue where there was a long line to what I call a box, or what other people call it, a casket. At first, nothing crossed my mind. But then my mind started to wonder if he was in there? How could I forget the times I went to his farm and chased the chickens around, the times he let me ride his horse, feed the cows, and play with his dog, Jaime. My mind started to wander around all over the place. What would happen to the horses? Where would Jamie go? All the small questions that no one was asking. Eventually, we got to the front I saw him lying there. I didn't know what to do, what to feel, I didn't know how to react in this situation. I wasn't familiar with funerals I've never seen one; never been to one. I wondered was what going to happen to him. Where were they going to store him after this, were they going to keep him at the house? I don't think so I've never seen a casket at any of my friend's homes. I sat down feeling uneasy about what happened, what was going to happen to him? A few hours passed and they took him away in that box, my parents drove to a cemetery, and we walked to a green tent. The weather that day was dark and gloomy, or depressed as I would say. Once we hit that green tent all I saw was his box, his casket. Slowly they lowered him into the hole. I thought “Is that it for him?” , which is a bit sinister for a 6-year-old.

It wasn't until after we got home that I really started to wonder if that's all? You live for a good 70 years or so and then you get buried in a hole? That same thought came and left for a year or so and then once again I went to another funeral, this time it was my cousin. I didn't fully understand the concept of death at this age. Death was just another state of being. Then again another one of my uncles died the next year. I was around 9 years old when it hit me that death is the final curtain. It's inevitable, the curtains will drop down, taking you with it. 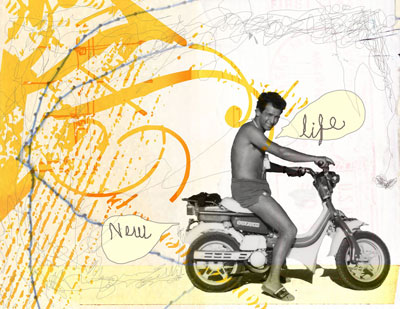