We all try to make ourselves successful, but we can’t always be that way.


This fall I decided to play tennis for the first time for the JV team. I didn’t know what I was going to expect but after a while I found my footing, as second to last doubles. While not totally awful it got worse as someone on our team broke his arm. My track record at that point was fairly decent, 4 wins and 4 loses I believe. I was decent for my first year. But it really changed after this guy broke his arm.

Going from a doubles to team to playing “Suicide Singles” was my newest change. The odd number had caused me, second to last doubles, to play last singles. Singles played first so it would be another change for me. I’ve never played singles before but I had confidence. I knew how to win points, I found my strong suit playing offence at the net and I was making it somewhere.


Game day came and I was first to play. My opponent looked scrawny enough and I thought it would be a tough win. “So have you played singles before?” He asked. I shook my head and replied, “No, have you.” He also shook his head and said no. I got even more mentally strong and cocky.


Saving the boring details of the game it was murder...for me. I got ground slammed at least 6 times and he hit me in the stomach with an overhead. In the end I lost 1-6 winning only 1 time. I was discouraged. How could I lose against someone with the same skill level as me in singles and have him be so scrawny? I had to be at least 20 pounds heavier than this guy and maybe more muscular and yet he still destroyed me. I was amazed.


It was difficult to lose, yes, but when it was told how much we won/lost by I was one of two people to lose their match. Everyone else on my team got wins except one other team. Here I was, fresh off the team and I was counted on and lost. This had me take a step back.


After the season I realized that even doing awful for the three singles I played, it made me a better player. I gradually won more points, but still lost. It showed how good I got and what I needed to improve on. I looked beyond that to see that even with my losses, I had several times where my doubles game would’ve made or broke us. It was twice that we clinched that win. And even in our first loss, my doubles still won.


It’s the ending result of growing from these loses that really makes you a better player. 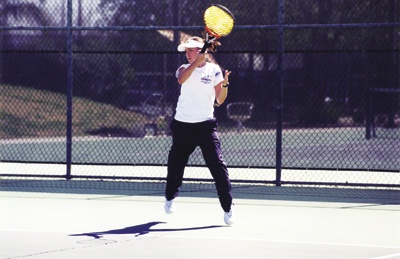