In real life, I was a blond-haired, blue-eyed 10-year-old girl who attended private school, took horseback-riding lessons, and loved to write stories and read. I wore floral dresses and clogs. I wasn’t allowed to wear makeup and rarely wore jewelry; I was a sheltered child. Online, however, I was someone completely different.

I didn’t plan to create Marrissa, she just developed over time. She was born a few weeks after I began spending time in chat rooms. No one was younger than 16, and I knew from my experience with older girls at school that you had to be their age to hang out with them.

I decided a little white lie wasn’t too bad and told the room I was Marrissa. I was 17 with Jennifer Aniston hair; I was 5'4" and weighed 110 pounds. My hobbies included cheerleading, going to the mall, kissing, and dancing in clubs. Immediately, men instant messaged me. They called me “honey” and asked about me. I was able to become the girl I wished to be, the type of teenager I idolized, and there were no foreseeable consequences. So it began. I would sign on daily and, as Marrissa, I met Nick.

Nick IMed me one humid summer night. He was 21 and loved computers, dogs, and women. He won me over instantly; unlike some of the men who tried to talk to me, he didn’t immediately ask about my fantasies. He just wanted to know about my life. We had long conversations about cheerleading and high school boys. He complained about work and the girl who kept hitting on him there; I feigned sympathy.

After a few weeks, I really got into my relationship with Nick and would rush home to get on the computer. A month after we “met,” he said he was in love with me, and Marrissa said “I love you, too.” I wasn’t, but it added to the plot and made things more interesting.

Then, the friendship changed. It was never an innocent thing; from the beginning Nick was suggestive but I didn’t understand most of his comments. Although I was imaginative, I knew nothing about sex or drugs. One night, I had a babysitter who was on the phone with her boyfriend.

“Hey, baby, what are you doing?” Nick typed.

I responded quickly, “Nothing, hun, u?”

Not knowing what that meant, I asked my babysitter. She laughed and told me, then sent me back downstairs. I dove into my seat and asked Nick, “Well, what do you want to do about that?”

“I know exactly what I want. Will you help me?” he responded.

I thought for a moment and knew Marrissa wouldn’t say no. And so things went from there. This was Nick, the guy who loved Marrissa; who loved me. I trusted him more than most of my friends. With a kind of sick, excited feeling in my stomach, I tried to play along. The most risqué thing I knew about was French kissing, so I told him I was kissing him. I realized I didn’t have to say much. He just typed what was happening, and if I typed some “mmm”s, he was content. Then he ended the scene and typed, “Thanks, Rissa, you’re the best. I love you, girl.”

I felt dirty. I took a bath and scrubbed at my skin until it was red. When I crawled into bed and curled up under my Little Mermaid comforter, I felt uneasy, like something was wrong, like I was wrong. I decided not to talk to Nick like that anymore.

That decision didn’t last. Nick IMed me the next day with the same goal. I told him I didn’t like it, and he replied, “You’re 17 and you don’t like having some innocent fun with a hot 21-year-old? Are you sure you’re who you say you are?” He was flirting, I knew, but the last thing I wanted was to blow my cover so I played along.

From then on, our talks were mostly sexual. He’d set up the scene and move the plot along; I only had to participate with small comments. I learned more than anyone my age should have, but it was too captivating to quit.

Two years later, when I was 12, Nick and I were still talking. Sometimes he would initiate cyber sex, but mostly we’d just make small talk. He told me he loved me, that I was amazing and beautiful. I just kept building on my story. Marrissa broke up with her long-time high school boyfriend and was completely dedicated to Nick. She was still a virgin, waiting for college and for Nick. We had begun to email and Nick would send me messages telling me he missed and adored me.

A week after I graduated from elementary school, Nick told me he had big news.

“You are the most amazing woman I have ever met. You’re willing to do anything for me, you’re smart, you like to talk, you want a big family, and you’re just perfect. I don’t know how I could live without you. Check your email,” he IMed. He was always full of compliments, so I didn’t expect anything big. The email was a picture, which I downloaded. It was a picture of Nick grinning from ear to ear, holding a beautiful diamond ring. Underneath, in bold, pink letters were the words, “Will you marry me?”

I typed, shaking, “What are you doing? Is it real?”

“I have loved you since the day we met. People meet on the internet and fall in love all the time, and you are my soul mate. I know you’re only 19, and I’m only 23, but we can make it. Just please say yes. I love you.”

Instead of responding, I blocked him. My initial thought was to tell him I was 12, to laugh in his face for his stupidity, but I decided not to. He scared me with his intensity, and he was still the guy whose friendship I cherished. Instead, I made it impossible for him to see if I was online or to email me.

Since that day I haven’t spoken to strangers online or pretended to be something I’m not. In an instant, our relationship stopped being a game and became real. I was overwhelmed with guilt because he fell in love and bought a ring, because I’d had inappropriate conversations with him, because I’d lied. Marrissa was as much me as she was a character, and that was shocking to come to terms with. That night, I wrote a letter to God begging forgiveness and promising never to try to grow up too quickly again, and especially never to lie. I almost convinced myself that it hadn’t happened, but then a year ago, I undeleted every person on my blocked list. Nick IMed me almost instantly.

“Marrissa?” he typed, his signature tiny blue font popping up on my screen and unleashing memories. I decided to tell him the truth. I told him I was just 17 this year, and that my name wasn’t Marrissa. I apologized for my deceit and hoped that he could forgive me. He didn’t respond. I waited a few minutes and told him that I hoped he had returned the ring, that I hoped his life turned out happily, and then I blocked him permanently.

I allowed something to happen that I shouldn’t have because I was young, curious and didn’t know better. I learned things I shouldn’t have, and betrayed a person’s trust. The internet is a dangerous place, and I learned my lesson the hard way. 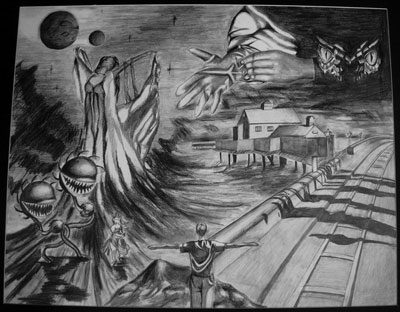 View profile
I was so hooked from the beginning. Though i cant really relate i felt like i could, i could feel the nervousness in the pit of my stomach. I hope everything works out for you and even though you dont talk to him anymore for him.
emoali18 BRONZE said...
on Nov. 23 2011 at 1:32 pm
emoali18 BRONZE, Indianapolis, Indiana
3 articles 0 photos 4 comments
View profile
Wow this was beautifully written!! I adore it! I can really hear your voice as you write it and the tone is fantastic. Great writing style! I was completely engrossed like cupcakeeater
CupcakeEater said...
on Jan. 30 2011 at 2:35 pm
I was engrossed in every breathe of this story, it was fantastic. 5*****
loveisblind GOLD said...
on Feb. 20 2010 at 10:18 pm
loveisblind GOLD, Tenino, Washington
10 articles 0 photos 71 comments

View profile
Wow, that's just....freaky. My friend went through something like that. Good story. I loved it!

I hope that you never have to go through that again.