The Art of Sound | Teen Ink

The Art of Sound

The music on the radio played in a hushed melody, muffled by the cadence of frigid winter rain cascading onto the windshield. An obtuse numbness to the host of sounds overwhelming the atmosphere swelled inside as the brakes of my dad’s truck let out an earsplitting screech upon coming to an abrupt halt in the church parking lot. Our halfhearted conversation ceased and I was greeted by a cruel blast of December wind. I managed a limp smile and hesitant wave before I slammed the door and listened to the hiss of the engine roaring down the road, fumes from the exhaust pipe defiling the air. Shoving my frostbitten hands in my pockets, I paced to the gleaming glass doors where I could see a multitude of people lined up, garbed in cheerful vivacity. As I cautiously crossed the threshold of the building to join them, I was in utter oblivion to the way my attitude of apathy towards music would be shattered in the hours to come.

“Hello! Welcome to the annualChoral Department Winter Concert,” chirped a buoyant woman, who mechanically thrust a crisp program in my face.

“Oh, thanks,” I replied in an aloof tone, weaving my way through chattering mob.

I entered the vast sanctuary where the concert was to be held and slid anxiously across a pew, murmuring apologies to people as I stumbled over them like the clumsy middle school student I was. Vibrant beams of light bounced off of the walls and onto the ceiling, where a cacophony of voices reverberated and where my silent gaze shifted. Inhaling the intermingled aromas of human sweat and holiday warmth, I couldn’t help but wonder what had enticed me to dispose myself to an environment of pandemonium and an evening dedicated to an obscure entity that had never resonated with me in a profound manner. In the back of my mind I knew that I had come seeking refuge, a citadel upon which to stand and escape my carnal struggles. I was skeptical, however, that the melodic vocalization of age-old yearnings of humanity would lift such burdens as I tepidly listened to the conversations of those around me, babbling excitedly like a crowd waiting to be fed. A cynical abyss burst inside my stomach until the lights dimmed and an omen of silence fell over the room, mitigating all sounds save for a handful of raspy coughs and a wailing baby.

The breathtaking sonority made its way to my ears first. Then, it coursed down my spine, raising the hairs on my arms and legs, and traveled into the soles of my shoes. The singers processed down the aisles, crooning an ominous anthem with words that I couldn’t quite discern, their voices swimming to the steeple and up to the heavens. I was transfixed into an abstract universe, one where the heights of exuberance and the depths of anguish were taken from a palette of ubiquitous sounds and painted onto a canvas of silence. Composition after composition was performed, each one blending in to the next. Selections entailed jubilant gospel celebrations, passionate love psalms, euphoric melodies, and bleak outcries of despair. The result was an invisible stream of light, so incandescent that it caressed me with its warmth and permeated the most opaque chambers of my soul. Months of loneliness, guilt, and desperation that I had kept masked behind the darkness became one with the music that carried them away. I was simultaneously awakened from my slumber and rescued from my restlessness. My own song pounded furiously at the walls of my chest, longing to be unchained in unison with like voices. I smiled a tear-streaked smile, knowing that music was universal, that I shine upon others the luminescence that had been bestowed upon me.

The next thing I distinctly remember is fervent applause that followed the ringing and release of a final consonant. As we rose in accord with one another, some clapped proudly for their children, others out of polite obligation. I made my way to my trembling feet and commended the beauty that their performance had achieved, satisfying the human desire for something divine and transforming the mentality of its witnesses. The choir’s director, who has now become one of the most influential people in my life, enthusiastically thanked the audience for their attendance and bid a warm farewell. Though many around me returned to the buzzing excitement of their livelihoods and left the sanctuary unchanged, I took the first tentative steps of a lifelong love of music and its supreme power. Boldly congratulating singers who were at the time complete strangers and embracing acquaintances, I expressed a zealous interest in joining the choral department upon entering high school the following year. The low hum of activities around me was no longer a drowning oppression, but the aesthetic potential for the art of sound.

As I exited the church that night and searched for my dad’s truck among the sea of cars, I walked with a purpose beyond fleeing the cold, rejuvenated by the hope that had been instilled. Greeting my father with a smile that now illuminates my face whenever I make music of my own, I listened for the soft melody playing from the radio, amplified by the cadence of dissipating winter rain tinkering onto the windshield . . . 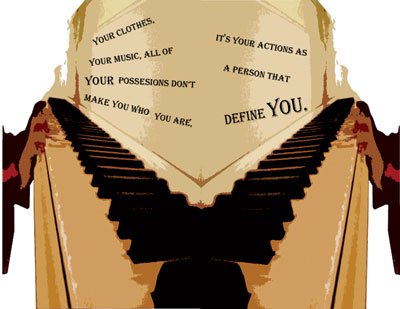