Loss of a Limb | Teen Ink

Loss of a Limb MAG

An old German proverb states, “The death of a friend is equivalent to the loss of a limb.” If this holds true, then not having a friend must be like missing a limb and hobbling along in life oblivious.

I never had close friends. Most of my communications with other members of the human race consisted of: “Hey, can I borrow an eraser?” or “Mom, is dinner ready yet?” People were just objects, incapable of thoughts and emotions, sitting in a never-ending display window that I once mistook for a life. I watched them disappear in and out of the fog. In retrospect, I watched the world go by.

My reasons for going to the mall on this day were a phone call from an acquaintance and the lure of mall Chinese food. When I arrived, the entire building was lit in porcelain white, the color of a fake smile; the food court was no different. I made my way toward sustenance and paid $7 for bad food.

Through the crowd I caught sight of Jake. He was hard to miss, considering his flamboyant personality and tendency to talk as though everyone were deaf. Beside him was an Indian girl whom even I would consider short at my five-foot-one stature. Jake had told me her name was Jenn.

“You know, for seven bucks, they should really give you enough for two people,” Jake complained.

“We should go to Jade Garden next time. We could feed all of us for this price,” Jenn offered. Her smile was more sincere than any I had ever seen. Jake seemed lost in thought, as though a sage-like wisdom would become him.

But instead he said, “And we could feed an entire Chinese village on the scraps of this meal!”

Jenn picked up a piece of uneaten broccoli. Her voice contorted to that of a midget on helium. “Jake, why have you forsaken me? Eat me, eat me. Why won't you eat me?”

Jake shrugged. “Hmm, because you are a deep-fried vegetable and the most disgusting thing I've ever laid eyes on?”

Jenn frowned and moved the broccoli so it looked like it was frowning too. I picked up a discarded baby corn and made it dance around.

In a simultaneous charge, Jenn and I attacked Jake with his discarded vegetables. He didn't enjoy it as much as we did. This led to retaliation. After Jenn and I concluded a vigorous discussion on the ethics of American Eagle, we noticed Jake had disappeared.

Keeping with my theme of randomness, I said, “I wonder if it's because of my eyebrows.”

“One of my eyebrows is thinner than the other. It really bothers me. I wonder if it bothered him.”

Jenn stared at me with the same bewildered look my mother gives me. “Okay, you are crazy.”

We called Jake, who informed us that he was at the bookstore. So we walked across the mall to find that he wasn't there.

“So I guess we're going to play mall tag,” Jenn announced after our third trip past Spencer's Gifts. “Are you still hungry?”

“Okay. Let's ditch him and go to Jade Garden. He can walk home.” So we left the mall and the disappearing shopper for cheap Chinese food. For the record, we did go back for him. Eventually.

They say all good things must come to an end, but friendship is not one of those things. Unlike every other acquaintance in my life, Jenn kept her promise to call me the next day, and the next, and the next.

Surprisingly the conversations we had were not mundane. Jenn was 21; I was just 16. Jenn worked as a chef. I once set a microwave burrito on fire. We existed in two different worlds and yet something held us together.

Sometime in September, Jenn came over for a movie night. Through a very democratic process we agreed on “Saw.” Sitting on my couch made of mattresses, we started the movie and one of the most important conversations of my life.

“Wow, someone really needs to clean that bathroom,” Jenn said of the basement torture room where two men were chained to a filthy bathroom wall, attempting to solve a sadistic killer's puzzle.

“Could use some decorations too. Maybe we can send the Fab Five over there,” I responded. I could tell that Jenn was picturing Carson Kressley's reaction at finding out he would either have to saw his leg off or have his family ruthlessly murdered.

“I would totally cut a body part off for Johnny Depp. No questions asked,” I boldly proclaimed.

“He's old and has kids. I'd settle for Chad Michael Murray.”

“Well, she has good taste then.”

We stopped talking when the main character began sawing off his leg. His screams, combined with the bad acting and all the fake blood, were enough to silence us.

“You know, now that I think about it, why would I do that for Johnny Depp? I wouldn't even be able to stand up and say ‘hi' to him,” I mused.

“Yeah, he'd probably be like, ‘Eww, who are you? And why are you bleeding on my carpet?'”

“Wouldn't even say ‘thank you for saving my life,' I bet,” I added.

“Yeah, I'd only do it if it was someone I really cared about. Someone I knew would do the same for me.” She paused to eat a handful of popcorn. “I'd do it for you, though. Who needs legs anyway?” 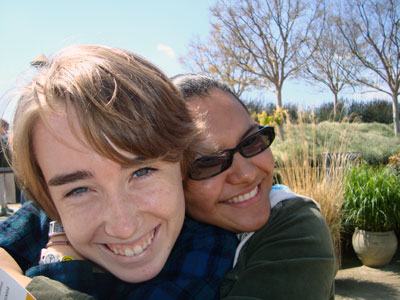 Favorite Quote:
it's not what you say you do that matters, it's what you show you do.

Favorite Quote:
"I would tell you I am not as crazy as I appear, but that would be a lie."

View profile
Absolutely amazing! I love the humor and the flow of the story. You did a spectacular job.
jaquetem BRONZE said...
on Nov. 27 2009 at 7:46 pm
jaquetem BRONZE, Cincinnati, Ohio
2 articles 4 photos 19 comments

Favorite Quote:
Get up and Raise your Voice!

View profile
that was awesome!!! i really enjoyedthat. great job (: