Tours of the Dream | Teen Ink

Tours of the Dream

I can still remember when we first moved into our house. We all viewed it as a huge mystery. The unknown past and hopes of the future living in it excited us to a large extent.

As most people do after they have settled into a new house, my parents felt the need to show it off as a testimony to being that much closer our worlds view of the American dream.

With Italian art on the walls, wild flowers confined to glass vases, and antiques displayed in front of the window, we opened our door to various families for dinner parties, casual get-together, and other events which caused us such unneeded stress in its preparation.

As the first guest would arrive Dad would be outside on the grill, Lauren would be turning on whatever sports event was currently being televised and Mom and I would be finishing preparation of the appetizers.

At the queue of a knock I would be the one to open the door and to greet our guests. After Mom came rushing into the mudroom, wiping her hands onto her pants out of habit, hellos they would usually be followed by compliments, such as, "What a nice house," or, "I wish that I had bought this home." Mom would force a laugh while basking in the glow of the compliments then would suggest that I gave them a tour of the house.

I would first show them the downstairs, telling stories of the art on the walls, pointing out the view of the creek from the living room window, and apologizing for the boxes of unpacked picture frames in the family room that we "haven't been able to take care of just yet."

After we finished downstairs I had to bring them upstairs. First we went into my parents' room and there would almost always be a quick laugh about the entire closet devoted to shoes. When we entered my parents' office they would admire the large windows looking out upon the small woods in our back yard. There never seemed to be much of a reason to see my sister's room or mine, but they would always insist.

Both of our rooms were covered in pastel-colored wall paper that was pealing right off of the walls and our window frames were painted so carelessly that white was splattered on the glass.

My sister's room looked comfortable and organized, like she had been living there for years, while mine was minimal in every way. In my room I had one bed, a bed side table, a closet and dresser of clothes. Every decoration that could have made it the smallest bit personal were in the still sealed boxes in the corner. It took me almost 4 months after we moved tor me to completely settle in because of my unwillingness to become a permanent resident of this scam. 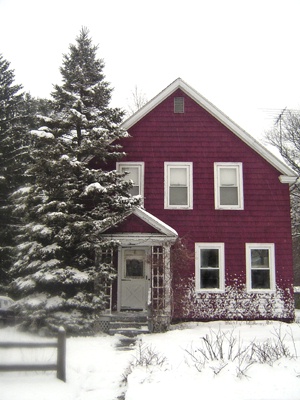 The author's comments:
This is a true story that took place two years ago.
Post a comment
Submit your own