A Week at | Teen Ink

Looking down the dirty brown river, when I was nine years old, on my own for the first time, after I was dropped off by my mother at the free summer camp for poor kids, I couldn’t tell you what those clumsy oars were for. The current was too strong. I just wanted to stare across the river and spit and watch the spit join the sea where I would never go. We spent the week standing in endless lines, waiting for our turns, watching those foam bubbles ride away—past the boats, past the floats, brown, brown, brown water, deep moving water churning, sun above us burning.

That summer, I wore fuzzy French braids. I still had a gap in my front teeth. I wore a blue, shrunken shirt from some old political campaign. In my head, my mother’s Fernando Ortega CD songs played, her Steven Curtis Chapman and Paul Smith, all those Christian oldies from her music thingie, which I listened to in the car all the time.

We were sprawled on the floor of the cabin, watching a Christian movie about a nine-year-old girl who got killed by a drunk driver. I was shocked. Jaylin cried so hard that she practically turned her eyeballs inside out. I could see the raw redness behind the glassy whites, as she lay there, blankly rubbing them in the darkness.

The girls were all ten and eleven, and I was nine. I looked five, and they didn’t believe my age for a minute. Till I informed them that twenty times three is sixty. Then Jaylin, impressed, picked me up and toted me around the gym, making me spit out math facts to all the kids. My life became a paradox—this shrimpy brown-haired twig of a girl with a big flapping mouth and writing in a journal I’d made myself, with pages tied together and the word PRIVATE. Jaylin started to draw a picture of me. She didn’t have time to finish the face.

I felt microscopic, like a creature squirming in a petri dish, too little to run, too weak and wimpy to keep up. The tagalong.

Just like I’d been two years ago, on the Avenue, where Joe and I trash-talked behind the broken fence, taking apart bikes and watching the Ortiz eyes. Lips gaping open, fighting voices, Astroturf and sandboxes, faded mail and beer bottles open in the sun, neighborhood days at the playground, birthday parties. All this ghetto life was not quite memory yet.

In the center of the girls’ tightly curled hairbraids which they worked delicately around their fingers, there was this mystery, like the years that I spent lost in history books, pounding, grounding, sounding in the sun. Their eyes are like windows in my dreams.

We spent a night in a tent in the woods, but we weren’t allowed to tell ghost stories, or space alien stories, either, because this was a Christian camp. Instead, we had to listen to the counselors tell boring stories about how they were converted in college. Jaylin spent the whole time complaining because she wanted more s’mores.

Riding around in the camp van, waiting for my Mommy and brothers, I was with a boy who peeled dead skin from his fingers. When I got home from camp, I wailed because Mommy had cleaned my room. She’d removed the blanket fort I’d pinned to the wall. This seemed like a grievous disappointment to me.

Immediately, my parents left for their weekend trip, leaving my camp-shocked self with the long-necked babysitter. I was told to tell him I could take care of myself, being nine years old and almost grown up. I resented such grown-uppish instructions, and I loudly informed Mr. Babysitter that I was a space alien only masquerading as a little girl named Lydia. He awkwardly humored my whims and welcomed this little freak’s homecoming.

I made the pancakes for breakfast the next morning, and I got a first-degree burn on my hand. But I didn’t tell nobody. My glasses-wearing, shrill teenage brother, and my chin-nudging, autistic brother, both had their own special places to go, and they didn’t know how real it was, this shock of away and home and away and home again.

My mother told me later I hadn’t combed my hair all week at camp. It looked like a rat’s nest. I was just trying to feel my curls. 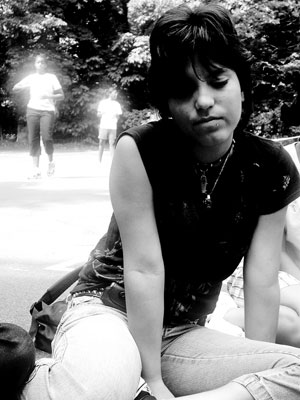 I keep seeing Teen Ink needs summer camp experience stories...well, this is mine...it was half a lifetime ago, thought. I can't believe I'll be turning eighteen this year!

View profile
i sucked my hair as a kid(as a stim). it got cut off so many times for that.